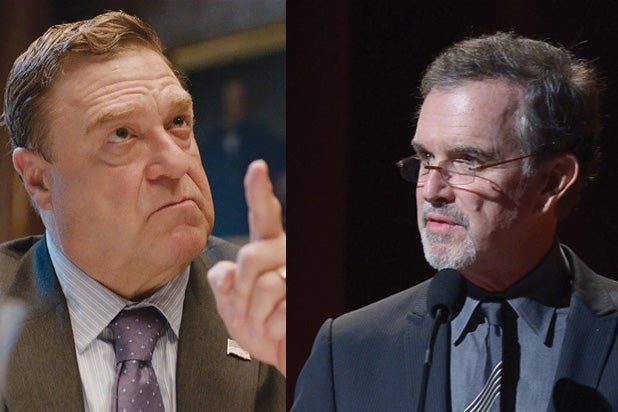 As the first comic-strip artist to win the Pulitzer Prize for cartooning, Doonesbury creator Garry Trudeau has more than four decades experience mixing character humor with political satire — something he has taken to television with “Alpha House,” an Amazon series about four Republican congressmen sharing a house in Washington, D.C. With a cast that includes John Goodman, Amy Sedaris, Haley Joel Osment and Cynthia Nixon, among others, the show had an 11-episode first season and is now prepping a second season to air during the heat of the fall elections. It is Trudeau’s first major foray into a televised comedy series since the Robert Altman-directed series Tanner ’88, which put a fictional presidential candidate on the real campaign trail.

Running the show must be a big change from the “Tanner ’88” experience.
It is. With “Tanner,” I very much stayed in my lane as a writer. Altman made me an executive producer, but it was a meaningless honorific. It was really his undertaking, and with his guerilla style he was probably he was the only director who could have pulled off that particular project. This show is much more the standard model, more of a collaboration with the studio.  And of course I’m producing for real this time, so I have far more responsibility.

Is there anything you learned from Altman that you’re using now?
Well, he had a very different relationship with writers than I have with myself. The first thing he said to me when we met was, “I have a reputation for eating writers for breakfast.” And what he meant by that was that scripts were just guidelines for him. That didn’t change how I wrote them, and some days I would hear what I had written word-perfectly. It’s just that he chose actors who, if necessary, could step off book if he found something interesting going on while crafting a scene. I had one experience where I listened all day in vain for something I’d written. And at the end of the day he could see I was a little despondent, and he said, “You know why you write this stuff?” And I said, “No, it’s not clear to me today.” And he said, “You write it so the actors know who they are.”

I take it you work differently.
I think Goodman in particular thinks I’m somewhat of a control freak, and that I zealously guard my periods and commas. But I know what I’m trying to get out of a scene. It’s not that I don’t like that kind of acting, it’s just that there isn’t time for us to improvise.

Why sign on as a real producer for this?
I didn’t think I would be a producer at first. Lorne Michaels was originally going to produce the show, in 2008. But we got out of the blocks really late because of a writers’ strike — and by the time we shopped it in the spring of 2008 with the idea that it would be “Tanner”-like and it would track the real campaign, it was too late. Everybody’s schedules had filled up, and nobody really wanted to talk to us. And then in 2012, my friend Jon Alter, who is a senior editor at Newsweek, took it out and found interest at Amazon — which I greeted with great skepticism, because I didn’t even know that Amazon had a studio. But they created an open-source portal for projects, and looked at thousands of scripts. Not surprisingly, they ended up funding ones that were actually produced by professionals. We were one of the original batch of pilots that they greenlit.

And then they put the pilots on the website, and asked viewers to pick their favorites.
I was terrified of that process.  Who wants to be troll bait? But it wasn’t that bad. And they probably ended up with far more data than your typical network studio executive would have about the audience reaction. Gridlock must be good for political shows.

Your show, “Veep,” “House of Cards,” “Scandal”…
Yeah, I’ve been trying to decide whether that’s to our benefit or to our disadvantage. But it’s good for comedy, of course. That gridlock, and the process being held hostage by the far right, gave us a very strong dramatic premise. Our main characters are mainstream Republicans who are adrift, trying to figure out how to respond to a challenge from the [Tea Party] right that traditionally they wouldn’t have. So in a way, we caught a wave that was just perfect for us dramatically. And we hope that we’ve made some of the more likable Republicans now on television. [Laughs] That’s our intention, anyway.