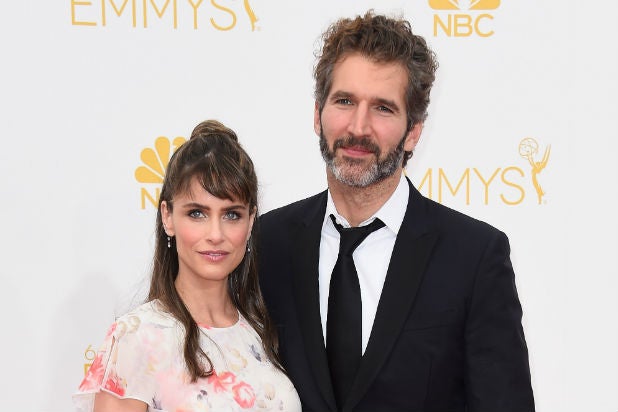 Amanda Peet, actress and wife of “Game of Thrones” co-creator David Benioff, is speaking out about the backlash over the HBO series’ fifth season — easily the most controversial in its run because of harrowing rape and public shaming scenes.

Peet, also an employee of the cable network on the Duplass Brothers drama “Togetherness,” defended her husband and his partner D.B. Weiss after episodes featured the violent rape of Sophie Turner’s Sansa Stark, and the degrading walk of shame suffered by Lena Headey‘s Cersei Lannister.

“I think it’s really misplaced. They write some of the greatest female characters that are on television,” Peet said during a recent interview for TheWrap’s Emmy Contender Quickies series. “It’s a misogynist world, this world that George R. R. Martin created, but we have to experience it without thinking that people are condoning this.”

“It’s much more insidious to have middling, ancillary female roles where the women are not part of the plot — where they don’t advance anything,” Peet argued. “Wife roles, girlfriend roles, there are very few of those in ‘Game of Thrones.’ If someone takes their clothes off and it’s a massive part of the plot? So be it.”

Not all of Benioff’s creative decisions land well at home, Peet revealed. She was devastated over the shocking death in the season finale.

“I was furious. He was already in Belfast, he’s back to work now on the next season, but I texted him and said, ‘I’m single now,'” Peet joked.

She’s not the only one close to production who is tired of complaints about content. The aforementioned Martin, whose book series “A Song of Ice and Fire” is the source material for “Game of Thrones,” said he’s had his fill of fan complaints as well.

“It is not my intention to get involved in those, nor to allow them to take over my blog and website, so please stop emailing me about them, or posting off-topic comments here on my Not A Blog,” Martin wrote in a recent post to his website.

“I cannot control what anyone else says or does, or make them stop saying or doing it, be it on the fannish or professional fronts,” he continued. “What I can control is what happens in my books, so I am going to return to that chapter I’ve been writing on THE WINDS OF WINTER [sic] now, thank you very much.”