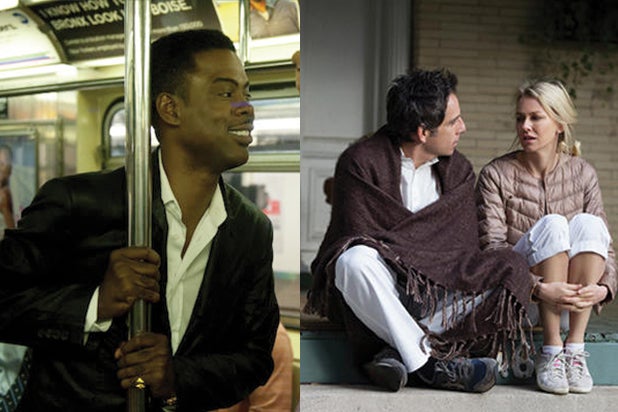 Chris Rock‘s “Top Five” and ‘s “While We’re Young” have landed two of the most lucrative deals of this year’s Toronto International Film Festival. That’s good news for , who produced both films, and for Barry Diller’s new IAC Films, which financed them both.

“Top Five” has been widely reported to be on the verge of a deal with Paramount worth more than $12 million, meantime “While We’re Young” signed a more modest $4 million one with A24, the same amount EuropaCorp is close to paying for the action flick “Big Game.”

But are “Top Five” and “While We’re Young” any good?

It’s no surprise that what will likely be the festival’s biggest deal is going to the former film, in which writer-director Rock plays a comic and actor who’s forced to examine his life in the wake of substance abuse problems and a career that has been derailed by his insistence on playing serious parts instead of the dumb but wildly successful roles that made him famous.

“Top Five,” after all, isn’t a little movie, an art movie or an awards movie — it’s a commercial play with enough laughs to deliver in multiplexes everywhere. Reports from Saturday’s premiere were that the film essentially blew the roof off the Princess of Wales Theatre, and it quickly attracted a spate of bidders.

Rock may not be playing himself, but his character’s sense of humor is Rock’s sense of humor, which is enough to give the film a raucous kick that will be instantly familiar to fans of his stand-up routine.

It’s a very raucous kick, mind you — without cuts, this film will seriously flirt with an NC-17 once the ratings board gets a gander at it. (It’s got lots of thrusting, always a problem for the MPAA, along with some digital stimulation best left undescribed.)

As a journalist, I would be remiss not to point out that “Top Five” is the latest in a long line of films in which the portrayal of journalism is so wildly unrealistic as to border on the ludicrous. The action is set in motion when Rock’s character is forced to tell his story to a New York Times reporter played by Rosario Dawson — but in fact, her behavior and her relationship with the paper is one that, for reasons that would qualify as spoilers, the Times would never remotely allow.

But Rock’s fans aren’t going to be buying tickets to see a realistic portrayal of journalism. They want a spirited (and damned funny) portrayal of Chris Rock the straight-talking, expletive-spewing and sharply insightful comic, which is exactly what they’ll get.

‘s “While We’re Young,” by comparison, is far gentler and a bit more consistent. It’s filled with Baumbach’s usual characters, New Yorkers with neuroses — though despite the title, it’s really an examination of what happens when we’re not young anymore. (Take his last film, “Frances Ha,” about a late-twentysomething trying not to grow up, and add about 15 years.)

plays a documentary filmmaker whose career has stalled mostly through his own stubbornness, with as his wife, who works for her father, a legendary documentarian wryly played by Charles Grodin. A chance (or is it?) encounter with a young, aspiring documentarian and his wife (Adam Driver and Amanda Seyfried) lures them into what seems to be a fresher, livelier world.

At least that’s how it seems initially. Before long, professional jealousy, changing ideas of what constitutes reality and sketchy motives complicate things in amusing and evocative ways.

The film gives Stiller what might well be his best and meatiest role since Baumbach’s four years ago, and puts Baumbach closer to the mainstream than he was with “Frances Ha,” “Margot at the Wedding” or “The Squid and the Whale.” (It’s closer, perhaps, to “Greenberg,” which deserved better than its paltry $6 million in box-office returns.)

“While We’re Young” is a low-key charmer, an observational comedy with more than a touch of It may require some careful nurturing to return on A24’s investment, but it’ll certainly strike a chord with viewers slightly on the high side of the industry’s most coveted demographic.