Mayim Bialik may not be the first “Jeopardy!” host to direct a film (that would be guest host LeVar Burton), but she is the first to write a feature film herself.

Of course, “As They Made Us” strives to be so much more than a piece of trivia: It’s a sensitive portrayal of end-of-life care from the perspective of a daughter who has endured a lifetime of emotional and sometimes physical abuse, and it mostly works.

Dianna Agron (“Shiva Baby”) stars as Abigail, a newly-divorced mother of two screaming children. The people in Abigail’s life don’t walk all over her; they practically stampede. Her ex-husband barges in unannounced and refuses to take his junk out of the house. Her mother Barbara (Candice Bergen) has borderline personality disorder, and their relationship is aggravating and fraught. Abigail writes for a magazine but never gets meaningful opportunities to shine. 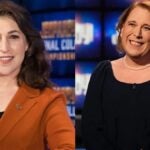 And then there’s Abigail’s father, Eugene (Dustin Hoffman), who is dying from a degenerative condition and rapidly losing his physical faculties. Abigail comes over to her parents’ house practically every day to care for her ailing patriarch, even when her mother doesn’t, despite the fact (as we quickly learn in flashbacks) that her father was emotionally and at least sometimes physically abusive throughout her childhood.

“As They Made Us” is a very forgiving film about seemingly unforgivable pain, which is to say that it has been made with a lot of unconditional love. Abigail’s resolute determination to be a dependable family member for parents who have practically destroyed her life could be seen as a cruel tragedy in the hands of a filmmaker like Todd Solondz, but Bialik finds a shocking amount of pity for Abigail’s abusers, if only because dying slowly is excruciating and providing end-of-life care for a lifelong spouse is also undeniably hellish.

Rounding out the cast is Simon Helberg as Nathan, Abigail’s brother, who abandoned the family 20 years ago for extremely obvious reasons. Nathan has never looked back, and when Abigail reaches out to let him know that Eugene is in hospice, he’s got a very quick decision to make about how much he actually wants to see his father one last time. 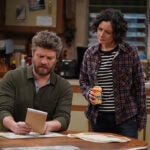 Nathan’s decision is somewhat surprising and deeply illuminating, and it throws Abigail’s own family situation into sharp relief. One wonders if Abigail has ever truly understood just how much damage her parents, however well-intentioned they might have been, actually inflicted on her life. One wonders if Nathan’s decision to sever ties completely was the only way he could truly find happiness. And one wonders if Helberg’s laconic, sad-sack performance suggests, even with a relatively small amount of screen time, that moving away was little more than a bandage for damage that was already permanently done.

As a cinematic construct, “As They Made Us” waffles between professional and lackluster. Attempts to de-age Hoffman in early flashbacks look almost unilaterally unconvincing, and the editing by Monica Salazar (“Honey Boy”) sometimes tries to work wonders with limited ingredients. There’s an odd moment where Abigail sees Nathan and his family from across a driveway and says “and they are coming over” even though Nathan has only just noticed her, from pretty far away. But in the next shot, he’s already walked over, strange as it clearly seems.

But the majority of “As They Made Us” is a solid character-driven acting showcase for everyone involved. Agron has a somewhat thankless task as a protagonist defined by her lack of agency, to the extent that even her biggest moment of life-changing character development happens off-screen between a major plot point and a “Six Months Later” title card. But she carries herself with immense dignity and emotional complexity. 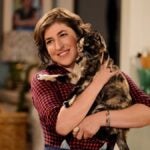 Hoffman is so effective at conveying on-screen fragility, up to and including a death rattle, that it’s genuinely shocking to see him acting so vital in the flashbacks. We’re so used to seeing this actor confidently dominate the screen that watching him recede evokes instant sympathy and even active distress. Helberg convincingly plays a man whose life seems dedicated to peacefulness and platitudes, no doubt as a way to protect himself from the volatility he experienced as a youth.

But it’s Candice Bergen who truly runs away with “As They Made Us,” acrobatically juggling the tricky emotional state of a self-centered person losing the only human being to whom she emotionally connects and handling it in the most self-centered way she can. Loneliness emanates from Barbara in practically visible waves, and her helplessness visibly emerges through the holes of her abrasive façade. It’s a dynamic and earnest portrayal of a person who never seems entirely earnest. It’s an electric role.

Bialik and story editor Jonathan Cohen have crafted a somewhat ramshackle production and filled it with excellent character work from an impressive cast. “As They Made Us” is sensitive to end-of-life care but, apart from a mawkish closing-credits sequence, doesn’t seem eager to let this family off the hook for their failings. It’s a relatively mature work from a first-time filmmaker, even if it’s a little rough around the edges.

“As They Made Us” opens in U.S. theaters and on demand April 8.