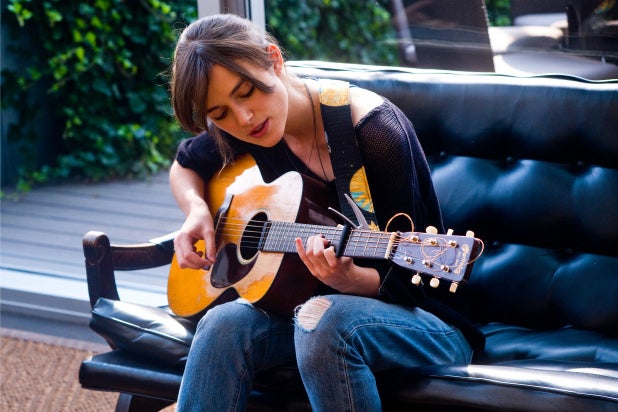 2006’s “Once” was such a delicate creation, a spider web made of spun sugar that it still feels impossible that it ever existed at all. A movie that could have easily tipped over into the twee or the mawkish was instead a quiet, perfect little romance expressed through music.

There’s no way that tuneful lightning was going to strike twice, but you can’t blame writer-director John Carney for giving it another shot in “Begin Again,” a film that premiered at festivals last fall under the title “Can a Song Save Your Life?” And even if this new movie doesn’t achieve the exquisite subtlety of its predecessor, “Begin Again” offers its own melodic delights.

It’s a film you have to meet at least half-way, with a vision of New York that’s so magical and disingenuous that I decided to treat this like something I might catch one night on Turner Classic Movies. Audiences in the 1930s were well aware that the Great Depression was raging all around them, but they were perfectly willing to believe that a hat-check girl could sing at a nightclub one night, get discovered by a big producer and have all her dreams come true.

“Begin Again” requires a similar leap of faith, but once I made it, I reveled in the charm, the romance and most of all the bevy of terrific songs, composed by Gregg Alexander, the pop maestro behind the short-lived 1990s project New Radicals. (If you still turn up the volume on your earbuds when “You Get What You Give” comes on, go ahead and buy this movie’s soundtrack right now.)

Singer-songwriter Gretta (Keira Knightley) and music producer Dan (Mark Ruffalo) meet at the worst possible moment: she’s about to leave New York and return to England after being dumped by boyfriend Dave (Adam Levine), a singer who has allowed fame to go to his head in the worst way, while Dan is tying one on after being fired from his own record label by co-owner and lifelong pal Saul (Yasiin Bey, a.k.a. Mos Def).

Gretta’s pal Steve (James Corden) convinces her to sing a song at his open-mic night, and while the crowd is mostly oblivious, a drunken Dan hears the possibilities of her plaintive ballad. (We see drums, bass, keyboards, and violins come to life behind her to create the single that Dan is recording in his mind.) Dan convinces Gretta to stay in town to make an album, and after Saul proves unenthusiastic, Dan and Gretta decide to record it themselves, guerrilla-style, in the streets and rooftops of New York City.

We’re firmly in “let’s put on a show” country here, but while the plotting can be admittedly hokey, the characters never are. We come to know what’s behind Gretta’s commitment to sincerity and Dan’s fractured relationships with his wife Miriam (Catherine Keener) and daughter Violet (Hailee Steinfeld); even Dave gets treated as a human being and not a grotesque caricature in Carney’s humane screenplay.

Alexander’s compositions are spot-on: they’re catchy enough to hook us in on the first listen and make us see what Dan sees in Gretta’s writing, and they’re flexible enough to exist both as solo guitar pieces or stadium-rock mega-anthems. And yes, that’s Knightley doing her own singing; she’s not going to give Adele any sleepless nights, but she has a sweet voice, with the acting chops to really put over what these songs are about. (My personal favorite is “Like a Fool,” a kiss-off song that Gretta leaves on Dave’s voice mail.)

“Begin Again” is as uncynical and unironic a film as I’ve seen in a while, which will no doubt be a turn-off to many. But like a catchy summer jam, it doesn’t need to apologize for being exactly what it is, nor do its fans have to feel guilty for getting it stuck in their heads.