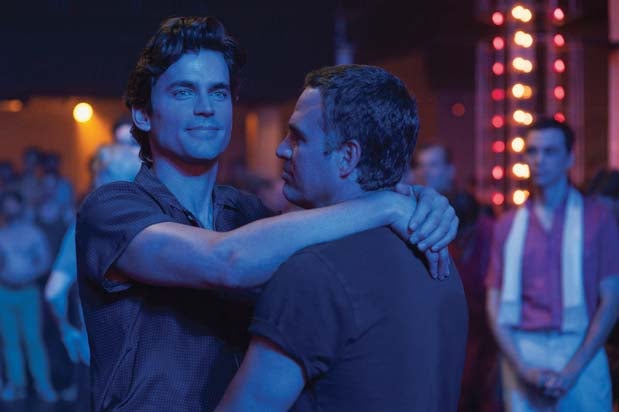 At the age of 17, Mark Ruffalo figured he knew a thing or two. He’d left the wrestling program at his high school and switched to the drama department for his senior year, acting in plays and hanging out in a community that included one openly gay choreographer. “He was the only gay person that I thought I’d ever known in my life,” Ruffalo said with a laugh. “And the only gay person that I thought lived in Virginia Beach at the time.”

Late in the school year, Ruffalo told TheWrap, he learned differently. “My best friend started to get really depressed,” he said. “He was the lead actor in the drama department, the guy all the women loved and the men wanted to be. But he was moping around for weeks, until I started asking, ‘What’s the problem, man? Did you kill someone? How bad could it be? What are you upset about?’ And that’s when he said, ‘I’m gay, and I’m in love with you, and I’m afraid you’re not gonna be my friend anymore.’ And I was like, ‘Well, I’ll still be your friend, but I don’t know about the other part.'”

His friend’s anguish, Ruffalo remembered, didn’t end with the sudden confession. “I don’t think he came out to anyone else that year, and he still had his girlfriend,” he said. “And even though I knew about it, we never talked about it again. I saw him struggle with it, and it was tough to watch.”

Almost 30 years later, Ruffalo is starring in a project all about the importance of speaking out, and the damage caused by silence. As Ned Weeks in Ryan Murphy‘s acclaimed HBO film of the Larry Kramer play “The Normal Heart,” he rages at the forces — governmental, societal and even within the gay community — that failed to speak up in the early years of the AIDS epidemic. Ruffalo plays a role based on the relentlessly activist Kramer, who wrote the original play in 1985, only a year after Ruffalo’s encounter with his high school classmate.

The cast includes Julia Roberts, Matt Bomer, Jim Parsons, Taylor Kitsch, Alfred Molina, Jonathan Groff and Joe Mantello, the star of the original theatrical production, and they all get big moments and deliver them with passion. But Ruffalo’s Ned Weeks is its centerpiece as the nagging, insistent, abrasive, obnoxious and vital voice that refuses to be silenced. Kramer (and his fictional alter ego) may not have been well-liked during those years in the ’80s when he simply refused to shut up, but he was also right: The guy who screamed the loudest and the longest was the one who forced action at a time when the president wouldn’t even utter the word “AIDS,” much of society blamed and ostracized the victims, and inaction meant death to an entire generation of gay men.

“He was despised for what he was doing, even in the gay community, but he invented modern activism,” said Ruffalo, who in his personal life actively campaigns against fracking and for marriage equality, among other causes. “Any activism we see today, whether it’s on the left or the right or the middle, is informed by what Larry and those guys in ACT UP did. They broke free from the Civil Rights movement. They did non-violent action, but it was direct and it was very creative. It was unorthodox, it was in your face, it was meant to be confrontational. They basically reinvented activism.”

Also read: 11 Lessons, Secrets and Revelations From the Emmy Ballot

Ruffalo initially encountered Kramer’s work when he came to Los Angeles to pursue acting in 1986. There, the Wisconsin-born actor first became aware of the plague sweeping the gay community — and over and over, heard classmates at the Stella Adler Conservatory deliver monologues from “The Normal Heart.” “It had such great, juicy roles for young men,” he said. “That was my first contact with Larry Kramer, although I also knew that ACT UP was starting to make a national noise.” (“The Normal Heart” details the creation of the Gay Men’s Health Crisis, which Kramer co-founded but left when he felt it was too passive, launching the more confrontational ACT UP.)

As Ruffalo’s career slowly got off the ground, first with forgettable movies like “Mirror, Mirror” 2 and 3 and later with breakthrough roles in 2000’s “You Can Count on Me,” 2007’s “Zodiac” and 2010’s “The Kids Are All Right” (for which he was Oscar nominated), he never appeared in or even saw a full production of “The Normal Heart.” So he was hardly expecting a call from Ryan Murphy saying that the “Glee” creator wanted to make a movie of the play, and wanted Ruffalo for the lead role.

“I was a little perplexed by it,” Ruffalo said. “I said to Ryan, ‘Isn’t it time that a gay actor plays this part?’ And he said, ‘No, you’re missing the point of the movie. It doesn’t matter if you’re straight or gay — I want the person I think is right for the part, and that’s you.'” Ruffalo signed on both as a star and as a producer, but when he and Murphy tried to get “The Normal Heart” off the ground as a theatrical feature, their overtures were rejected again and again. “No studio wanted to make it,” he said. “They all said it was too heavy, and too much of a fringe story.”

The project moved to HBO, which achieved enormous success (and won 11 Emmys) with Mike Nichols‘ adaptation of another major theatrical work about AIDS, Tony Kushner‘s “Angels in America.” As they struggled to find a way to translate the play to the screen, Ruffalo spent a lot of time with Larry Kramer, who was in failing health but made himself available to the actor. “I got to just pummel and harangue him with hours of questioning, and long emails back and forth,” he said. “‘Where was this?’ ‘When did this happen?’ ‘Who did you talk to?’ At one point he just said, ‘Stop thinking so goddamn much! You think too much!’ And I went ‘Oh, really? This is coming from you?'”

What he particularly admired about Kramer, he said, is the way the playwright and activist had been lobbying to redefine gay identity for more than 30 years. “Back in ’78 and ’79, he was saying, ‘We’re more than just who we’re having sex with. We’re an entire culture, and we will never find happiness by just putting all our eggs in the basket of, ‘Hey, look at us and look who we’re fucking.’ He knew that in ’78, and he was hated in the gay culture because of it.”

Many of those who knew Kramer during the time depicted in “The Normal Heart” have said that Ruffalo’s Ned Weeks is considerably less abrasive than the real Kramer was. But Ruffalo shrugged off those comments — partly, he said, because the key to his portrayal was not learning about the activist side of Kramer, but seeing the personal side.

“There’s a lot of bravery on his part,” he said. “He opened up in a real personal way that wasn’t in the play originally. And I think I got to know him in a very honest way, where I feel he was very vulnerable with me. He’s at a place where he doesn’t have to defend himself or paint some picture of himself that he wasn’t. I saw this really sweet, deeply caring, loving, insecure man–a side of him that you wouldn’t see by reading his work or watching his interviews or seeing him at a rally at the time.

“I’m not sure the people who say Larry Kramer was more offensive than my character really knew him. I think they knew a side of him that he fostered in order to play the role that he cast himself in in that struggle. But I’m not sure that that was entirely who he was.”

See video: Mark Ruffalo Struggles to Be Heard About AIDS Crisis in New Clips From ‘The Normal Heart’

Kramer, he said, saw “The Normal Heart” with a group of the friends who survived the early days of the AIDS epidemic; he later sent Ruffalo “a beautiful email” describing how happy he was with the result. “What I was after, and what I think Ryan was after, too, was to take it out of this agit-prop style of theater, which is meant to be confrontational and in people’s faces,” said Ruffalo. “We didn’t want to be polemic — we just wanted to tell a human story about people, and their struggle to find love.”