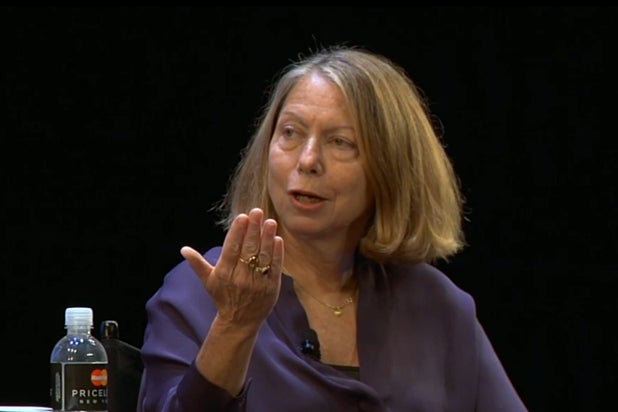 The news that Jill Abramson, the first female executive editor of the New York Times, had been ousted from her position on Wednesday led to a debate over the reasons behind it and whether unequal pay was at the heart of her departure.

The Times’ own Ravi Somaiya cited publisher Arthur Sulzberger Jr. as saying “an issue with management in the newsroom” was the reason for Abramson exiting the job after two-and-a-half years, to be replaced by managing editor Dean Baquet.

But New Yorker writer Ken Auletta wrote Wednesday that issues over pay and pension may have led to Abramson getting the heave-ho. His sources said there was a gap between Abramson’s compensation and benefits and those of former editor Bill Keller, though other sources in his story said the pay gap had been closed.

“Jill’s total compensation as executive editor was directly comparable to Bill Keller‘s during his time as executive editor,” Murphy wrote in an email to TheWrap. She declined to discuss the matter by phone.
She added: “[Abramson’s] pension benefit, like all Times employees, is based on her years of service and compensation,” Murphy wrote in an email. “The pension benefit was frozen in 2009.  So, yes, there would be a difference in pension benefit.  Bill was a 30-year employee, most of that time spent prior to 2009.”

In October 2011 Auletta wrote an extensive profile of Abramson shortly after her ascension to the helm of the Times that characterized her as “intimidating and brusque” and “too remote.”

And other reports from within the newsroom suggested that Abramson was simply, “difficult to work with” and that her management style was, “condescending” and “disengaged.”

In April 2013, the normally mild-mannered Baquet stormed out of the newsroom after a contentious meeting with Abramson that staffers described as “the altercation,” according to Politico.

“Every editor has a story about how she’s blown up in a meeting,” an unnamed reporter told Politico.

In one meeting, Abramson was upset with a photograph that was on the homepage. Rather than asking for a change to be made after the meeting, she turned to the relevant editor and, according to sources with knowledge of the meeting, said bluntly, “I don’t know why you’re still here. If I were you, I would leave now and change the photo.”

Still others were upset that Abramson was nowhere to be found when the Times was going through its toughest times, like when senior editors and managers were being forced to take buyouts to reduce the paper’s bottom line.

“The Times is leaderless right now,” one staffer said at the time.

Perhaps that leadership issue is what led to Sulzberger’s decision to make a change. The publisher told Times staff that the call had nothing to do with the quality of the journalism, nor about any sort of disagreement between the newsroom and the business side.

“Rather, I choose to appoint a new leader for our newsroom because I believe that new leadership will improve some aspects of the management of the newsroom,” Sulzberger told the staff, according to prepared remarks provided by a Times spokesperson.

When asked by TheWrap, the New York Times said it would not comment further on Abramson’s management style beyond the earlier press release and Sulzberger’s remarks.