The film has been in development for some time and will star Troy Kotsur, who was recently seen in “CODA,” along with actress Deanne Bray (“Heroes,” “Curb Your Enthusiasm”) and “Deaf U” host Nyle DiMarco.

“Flash Before the Bang” is a coming-of-age story inspired by the life of the film’s deaf writer and director Jevon Whetter. It follows a track and field team at the Oregon High School for the Deaf who in 1986 overcame discrimination and adversity to become state champions.

Kotsur in the film will play the team’s head coach, DiMarco an assistant coach, and Bray will portray the mother of one of the film’s young co-lead.

“Flash Before the Bang” will also now utilize an inclusion rider, which Pearl Street is bringing into all of its projects in development. The film’s producers have enthusiastically embraced the inclusion rider, and though the rider is intersectional in its focus, the producers aim to “continue to uplift Deaf cast and crew in order to get this story right.”

Casting is underway for other roles. Filming is targeted to begin in the spring.

Dave Alan Johnson and Joan Considine Johnson are credited on the film’s story along with Whetter and Hayden Roush and Joan Johnson is a co-writer of the film. 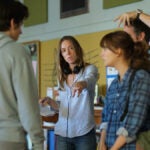 Dave Johnson will also produce the film alongside Exodus’ Delbert Whetter and John D. Eraklis. Pearl Street’s Fanshen Cox has also come aboard the film as an executive producer.

Kotsur was most recently seen in Apple’s “CODA” alongside Marlee Matlin and Daniel Durant, and Bray is reuniting with Johnson after working together on the series “Sue Thomas: F. B. Eye.”

The film also earned a handful of distinctions in its early stages, including Film Independent’s 2020 Fast Track & 2018 Producing Lab, the Producers Guild of America 2019 Power of Diversity Master Workshop and the SFFILM 2019 SFFILM-Rainin Grant award winner. 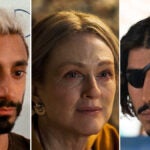