Muhammed Ali once said “suffer now and live the rest of your life as a champion.”

The turn of phrase aptly applies to the life of Harry Haft, the Polish Auschwitz concentration camp pugilist forced to literally fight for his life before becoming a professional boxer after World War II.

And it can also be said of Haft’s eventual portrayer, actor Ben Foster, whose performance in HBO’s “The Survivor” ranks among those such as Robert De Niro in “Raging Bull” and Christian Bale in “The Machinist” for sheer, can’t-believe-your-eyes physical makeovers. 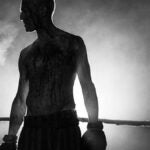 Such a feat cannot be accomplished alone, so Foster enlisted his trusted personal makeup expert, Emmy-winner Jamie Kelman, to create the marked change. “The Survivor” is directed by Barry Levinson, who gave Foster his first major film role, in the director’s Baltimore valentine “Liberty Heights” from 1999. But it was Foster and Kelman’s fourth collaboration and proved to be one of the most challenging. After all, this is a feature in which Foster would have to play several decades through Haft’s life and lose 62 pounds film scenes for the black-and-white Auschwitz scenes, a strong contrast to the color scenes in which a puffier, fuller Foster appears.

“It’s kind of the dream, when you find an actor who you really mesh with, and who feels comfortable in your hands,” says Kelman, who has also worked closely with actors such as Joseph Gordon-Levitt (“Looper”) and Sam Rockwell (“Vice”) and directors like David Lynch and J.J. Abrams for past projects. “And in the chair, and it says much about knowing that the work is going to be good, but it’s also important to have a nice personal interpersonal relationship, because you spend so much time together. It’s a whole package with somebody you want to be able to spend that two or three hours of chair time with. But then, Ben is one of those guys who loves makeup.” 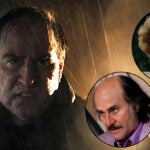 And Foster — who refused digital weight-loss tricks for the role, consumed only 500 calories a day and spent up to three hours in the chair daily — put his faith entirely in Kelman’s creations, even at Christmastime. (“He told me he had broth for Christmas dinner,” says the makeup master.) These prosthetics included up to eight pieces minimum, including eyebrow-hair pieces to change his skull shape and upper and lower dentures to change the shape of his mouth. “It’s a lot for somebody to wear every day through a movie,” Kelman says. “But Ben is that kind of actor who I think it helps him get to that place and look in the mirror and see that person and be that person.”

And this being a major motion picture, Kelman is shrewd enough to employ tricks of the trade that do not put the entire emphasis on Foster’s dramatic weight-shedding. “When Ben was emaciated, we did all kinds of tricks, like reverse highlight and shadows,” Kelman notes. “So instead of enhancing his musculature, we were trying to flatten it out to make him look like he was nutritionally poor. And we use sickly colors, blues and yellows, that even though it was black-and-white on film, it still reads differently than the healthy reds and browns that help you with muscle and contouring.”

Kelman, an Emmy winner for his work Steven Soderbergh’s Liberace drama “Behind the Candelabra” and Fox’s medical drama “House,” notes that prosthetics have come a long way in the last decade or so, with actors able to have much more mobility. Says Kelman: “It has fully matured. In the ‘90s, it was still foam latex and gelatin if you wanted translucent material. And silicone did become an overused buzzword for years. But now it’s finally gotten to that properly seasoned place that we can do a makeup on a woman to make her look like a character or aged, and she has flawless skin. I think that’s why we’re seeing so many of these female-led prosthetic projects like and ‘The Eyes of Tammy Faye‘ and ‘Pam & Tommy’ and ‘Angelyne,’ that stuff didn’t used to work as well.” 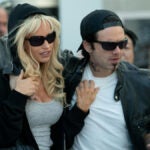 And Kelman is a busy as ever, with Disney+’s “The Book of Boba Fett” and NBC’s “The Thing About Pam” in his aired roster this past year as well as “The Survivor”, and his next collaboration with Foster, the Roman Empire drama “Medieval” expected later this year, bringing his film and TV total to more than 50 projects ranging from superhero epics to hard-hitting dramas.

Kelman says the variance in assignments and collaborators is no accident. “If I do too much of any one thing, I get bored,” he says. “I’m going to do as much varied work as I can for the rest of my life. I think if you just do one thing too much, sometimes you don’t get better at it. So, I like to stay a little bit nervous about the fact that the work can fail if I’m not trying hard enough. That helps me do better work.”

“The Survivor” is now streaming on HBO Max 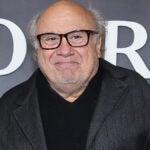 Also Read:
Danny DeVito on Reuniting With Barry Levinson for ‘The Survivor’ and the State of Film Distribution