When it came time for director Barry Levinson to cast the role of famed boxing trainer Charlie Goldman in his new film “The Survivor,” he went straight to his friend Danny DeVito. “This was all Barry,” DeVito said about how he came to be a part of the HBO Holocaust film, telling TheWrap it was like no time had passed at all since he and Levinson first worked together on the 1987 film “Tin Men.”

“The Survivor” tells the true story of Harry Haft, a survivor of the Auschwitz concentration camp who was forced to box other inmates to survive – sometimes to the death. The film – which premieres on HBO and HBO Max on Wednesday timed to Yom HaShoa (Holocaust Remembrance Day) – plays out in two timelines, as Haft tries to make a life for himself in America after the war but is haunted by the events that happened inside Auschwitz, told in striking flashbacks. 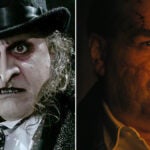 “You see a lot of Holocaust movies – and rightly so, we should keep the education up so that people understand what we’ve been through as human beings – and this is a unique story,” DeVito said of the story focus in “The Survivor.”

The actor, producer and sometimes director was unfamiliar with the story of Haft or Goldman when he was first approached for the role, but was intrigued. “Besides the whole Harry Haft story and what was going on in that time in our history, I found Charlie and that was great to find this time in Rocky Marciano’s life where he had Charlie as his corner man and his mentor,” DeVito said of what he discovered in his research. “But I didn’t know anything about Charlie or the details of his life, and how a lot of his family was lost in the camps.”

Besides the story, DeVito was happy to work with Levinson again in a professional capacity. “Over the years after that wonderful experience of ‘Tin Men,’ we became friends and we kept in touch and we’d see each other periodically if we were in the same part of the country. And then this happened and we rekindled. It was almost like we never stopped – we were still in Baltimore talking about whatever we talked about, silly things.”

“The Survivor” is premiering on HBO and HBO Max this week after being acquired by HBO Films last October, although it’s not hard to think of this powerful drama getting a robust theatrical release just a few decades earlier. Given DeVito’s history in the industry, TheWrap asked for his thoughts on the current state of distribution.

“Film-lovers, we were all raised on going to that big movie house and going in there and the lights go down and you’re off into the unknown world of whoever’s presenting their movie to you, and that’s what we want,” DeVito said of the theatrical experience. “Our heart’s desire is to be swept away into this movie world, which we want to come back, and we hope and pray that it comes back.”

However, DeVito also sees a positive in the robust amount of streaming and at-home releases right now: more movies are getting made. “In terms of the streaming services and all that stuff, I would say that you have to embrace the fact that they’re making a lot more movies, they’re giving people a lot of chances, you get up to bat. Support any film festival that you can and also any movie theater than you can. I think because of the internet and the landscape, we’re advancing and moving in various ways where more and more movies can be made. There can be a lot more chances to find good stories, and in that way you look at it as a positive.”

And while DeVito is partial to the theatrical experience, he admitted a recent film was just as powerful on the small screen. “I saw ‘CODA’ on a television honestly and cried three times. I loved the performances and am happy that a movie like that gets made.”

The same could be said of “The Survivor.”