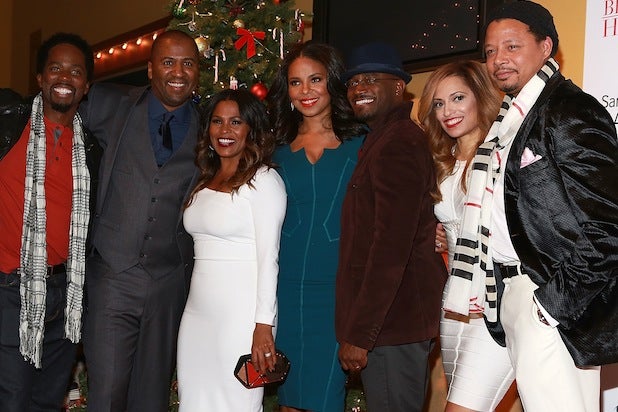 Malcom D. Lee has kept plenty busy since his breakout hit “The Best Man” in 1999, with successful follow-ups like “Undercover Brother” and “Welcome Home, Roscoe Jenkins” — and has steadily worked with nearly every prominent African American comedy star in Hollywood.

But even Lee (above, second from left) acknowledges that “The Best Man” was lightning in a bottle, so it’s no surprise that a sequel came of it, even all these years later.

Lee spoke with TheWrap about his movie — which opens Friday and is expected to double the original’s $9 million opening, then play strong through the holidays — the encouraging state of black filmmaking in 2013, and the “Saturday Night Live” diversity problem that just won’t go away.

It’s been 14 years since “The Best Man” – have you been tinkering with the sequel all this time?
When I set out to make the first movie I wanted to make a classic. Fortunately, it has been regarded in that way by the fans who really adore the movie and who have seen it multiple times. I said “Well, that’s it, I don’t want to do a sequel to this movie … sequels don’t always work.” So I said the only way that I would do this movie is if it was 10 years later. Characters would have some kids, and mortgages, and be in their marriages for a little while. And there would be more to say and something different to say.

And what was that?
I knew I wanted it at Christmastime, I knew I wanted the element that we surprise people with in there, and I knew that it had to be better than the first one. And I didn’t really commit anything pen to paper really until I got my cast together back in 2011. I sat them all down and I said listen I’ve got an idea for a sequel, let’s all get in the same room … I said, “Here’s my idea, if we think this is worth doing then I’ll pursue it, and if we don’t we’ll leave well enough alone and at least we caught up.” I pitched the ideas, they really liked it, and they said, “We’re in, let’s make it happen.”

You got every single cast member back; for such a large and accomplished ensemble, that’s a feat.

I will say this, we all met and had a mission the first time around. “The Best Man” was one of those movies that really was kind of lightning in a bottle; there hadn’t been many films where African Americans were just being people. Who were educated, who had dimensionality as characters. They knew they had to work for a living, they had aspirations, career goals, wanted to be married, wanted to fall in love.

Prior to that, there weren’t many movies like that. If there were they were kind of caricatures, especially if there were black people who were educated. If you went to Harvard, you were a sellout, you spoke proper English and you aspired to be not just American, but you aspired to be white, and it was like – this is wrong, it didn’t feel right for me. (The cast) all felt like “Wow, here is our chance as actors to show what we can do.” … We are the original Black Pack if you will — there was the Rat Pack but this is the Black Pack.

A lot has been written about this year being a sort of Renaissance for black films and filmmakers.
I think we’ve seen this kind of volume before; we’ve seen peaks where it’s like, “Wow there is a black movie every month or every three weeks or so” – but they all tended to be the same kind of a movie. In the ’90s there were all these kinds of ‘hood movies, then it slowly it started to be the black romantic comedy in the earlier 2000s, then somewhere along the line it petered out, movies helmed by African Americans or were African American-themed, and it petered out and the studios said we’re not making these movies anymore, the world’s changed, we’re post-racial, nobody wants to see these movies anymore. Forget it.

This past 18 months have been great, because there’s been a real diversity of product out there and I’m very encouraged by that. From “Middle of Nowhere” last October to “Fruitvale,” “42,” “The Butler,” “12 Years a Slave,” “Baggage Claim,” my film coming, “Black Nativity” on the horizon, “Medea Christmas,” “Ridealong.” It’s not just one kind of movie. There’s black historical dramas and there’s sports historical dramas. There’s comedies and there’s musicals. So let’s keep that going. … When “Think Like a Man” made like $91 million last year I bet every black actor and writer and development exec dusted off all kinds of scripts and said hey, let’s go.

Unlike “The Best Man,” you have a prominent white cast member in this ensemble. Was that a conscious decision – were you thinking crossover appeal?
I wrote a movie that is very universal. You can put any face on these characters and you would understand the universality of what these characters are going through. And when casting a character to be a love interest of Jordan (Nia Long; her character’s boyfriend is played by Eddie Cibrian, left), I said, “Let’s play with something that we don’t get to see that often in movies but is very much a reality.” Especially for a black woman who is extremely successful and is extremely driven to be CEO — it’s gonna take a certain kind of man who’s going to be able to check his ego at the door, but at the same time be strong enough to deal with her and get her to be vulnerable with him.

That role of Brian was not an easy role to cast because let’s face it – there are still some sections of this country that have issue with interracial relations. But I think it’s very real and very possible that a black woman could fall in love with someone like Eddie Cibrian and vice versa, so in casting that role it couldn’t just be anybody, it had to be a guy that not only black women would like, but that all women would like. Also he had to be a guy’s guy. He had to have some swagger to him, he had to have some flavor to him so he could stand with these actors, and for the audience to buy it and say OK, he’s cool.

Much has been made of “Saturday Night Live’s” lack of a black female cast member. As a person who’s worked with dozens of funny black women, what do you think of the explanation that there’s no one “ready” for it?
I don’t buy that. “SNL” has an amazing cast right now, I mean — amazing. There are some of the best cast members I’ve seen in a number of years. The new people they got as of a year ago, and even adding on to this year, great. I’ve heard it before, “We cast the best people available,” but I don’t buy for a second that there isn’t an African American female comedienne out there that would do a good job on the show.

Kerry Washington killed it! She’s not even a comedic actress, she’s just a really great actress, she killed the role that she was doing! She nailed everything! I give SNL props for addressing it head on, the way they did I thought it was great. But they could find somebody. … To say there’s no one out there who is “SNL”-ready is BS because believe me, there have been plenty of people on that show for years who weren’t “SNL” ready. … They can’t shove somebody in there now, but you can damn sure bet that this summer they’ll be auditioning a lot of black comediennes. A lot.