If you’re looking for new movies to watch on Netflix, you’ve come to the right place. The streaming service added a bounty of new films in April, some of which are bona fide new releases while others are great library titles newly added to the rotating queue. Indeed, it can be difficult to prioritize what to watch, so below we’ve singled out seven films we think are worth putting at the top of your list ASAP. They range from Oscar-winning dramas to R-rated actions to underseen indies, with an ooey-gooey romantic comedy thrown in for good measure.

Check out our list of the best new movies on Netflix in April below.

Ben Affleck’s third directorial effort won the Best Picture Oscar despite him being snubbed in the Best Director category, and you know what? “Argo” is a humdinger of a movie. Based on a true story, the film follows a CIA operative (played by Affleck) who was dispatched to Tehran during the 1979-1981 hostage crisis to rescue six U.S. diplomats. He did so by disguising them as a film crew making a science-fiction film, with John Goodman and Alan Arkin playing the Hollywood producers helping create a fake movie back in California. In addition to Best Picture, the film also won Best Adapted Screenplay and Best Editing.

The Guillermo del Toro-directed “Blade II” is a cool, R-rated superhero sequel to the 1998 original film starring Wesley Snipes. This time around, Snipes’ daywalking vampire is forced to team up with a group of bloodsuckers to take down a new breed of vampires, resulting in some truly jaw-dropping set pieces (and incredibly cool vampire designs) courtesy of the Oscar-winning “Shape of Water” and “Hellboy” filmmaker. If you’re in the mood for a fun action movie, check this out.

If it’s underrated gems you’re looking for, 2013’s “Her” is a full-on masterpiece. Written and directed by Spike Jonze (who won the Best Original Screenplay Oscar for his work on the film), the story takes place in near future Los Angeles and follows a lonely and introverted man named Theodore (played by Joaquin Phoenix) who boots up a new Operating System with artificial intelligence. Dubbed “Samantha” (and voiced by Scarlett Johansson), this new OS begins learning about the world through interactions with Theodore, which in turn cause Theodore to fall in love. While the premise sounds like it could be silly, Jonze’s humanistic approach to the story and Phoenix’s gentle performance result in a wildly emotional, romantic tale about life and loss and love.

The ultimate romantic comedy, “Love Actually” is a delightful watch at any time of the year. Written and directed by Richard Curtis, the film tells the love stories of various characters in the U.K. during Christmastime. There’s Hugh Grant’s bachelor Prime Minister, Laura Linney’s lonely caretaker, Emma Thompson and Alan Rickman’s fading marriage, and plenty more stories that fill out this hodgepodge of love in its many forms. Cliched? Sure. Effective? Absolutely.

Looking for a good scare? Despite the title, 2016’s “Ouija: Origin of Evil” is actually a pretty terrific horror film. Technically a prequel to the misguided 2014 film “Ouija,” this feature hails from “The Haunting of Hill House” and “Doctor Sleep” filmmaker Mike Flanagan and tells a story, set in 1967 Los Angeles, of a young widow (Elizabeth Reaser) working out of her home with her two daughters as a medium. But when they appear to contact real spirits, all hell breaks loose.

Steven Spielberg won his second Best Director Oscar for his 1998 war film “Saving Private Ryan,” which is considered by many to be the definitive film about World War II. Tom Hanks stars as a Captain in the U.S. Military who is tasked with assembling a team to find a Private James Ryan (Matt Damon) shortly after the Normandy Invasion, due to the fact that all of Ryan’s brothers have been killed and the U.S. government wants to ensure he returns home safely. Following the journey of Hanks’ crew, the film takes viewers through the various horrors of World War II, and the impressive ensemble cast includes Edward Burns, Jeremy Davies, Barry Pepper and Adam Goldberg.

If you’re just in the mood for a laugh, Judd Apatow’s new film “The Bubble” will do the trick. This Netflix original follows the crew of a massive blockbuster trying to film a franchise sequel in the midst of the pandemic, as the ensemble cast and crew are locked away in a hotel in London together for quarantine purposes. Madness ensues, and the cast includes Karen Gillan, Keegan-Michael Key, Leslie Mann, Fred Armisen and Pedro Pascal. 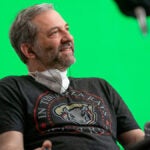