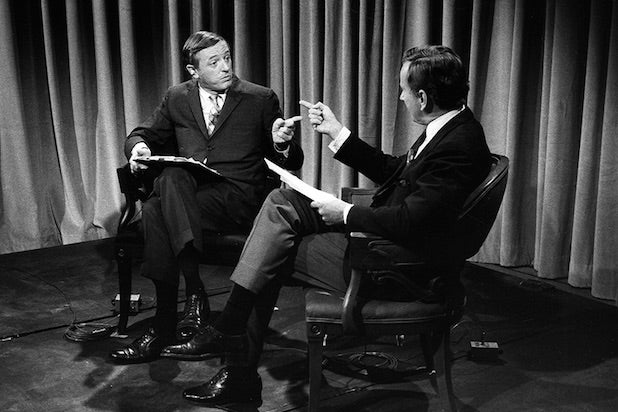 Morgan Neville and Robert Gordon’s “Best of Enemies,” which premiered at Sundance in January and opens in Los Angeles on Friday, is a highly entertaining historical document that quietly manages to be both very funny and deeply depressing.

It’s funny because its subjects, conservative firebrand William F. Buckley and liberal provocateur Gore Vidal, were wickedly witty intellectuals who hurled vicious barbs at each other during their 10 televised debates in 1968, the subject of the film.

And it’s depressing because it’s impossible to watch the two patrician, formidably well-spoken gents go at each other and not bemoan the fact that in today’s political discourse, intellectual is a dirty word, and nobody wants nuance when they can serve up easily digestible if dubious talking points.

And you can even blame Buckley and Vidal for part of that. Their debates, an attention-grabbing gamble for third-place network ABC, galvanized the viewing audience and drew increasingly big ratings during the 1968 political conventions. But less attention was paid to the substance of their political views than to the insults they delivered — particularly in the ninth debate, when Vidal labeled Buckley a “crypto-Nazi” and an enraged Buckley blew up, called Vidal a “queer” and threatened to punch him in the face.

Neville and Gordon last worked together in 2009 on “Johnny Cash’s America,” one of several music films they’d done together. In the interim, Neville won an Oscar for the 2013 film “Twenty Feet From Stardom.”

TheWrap: It’s remarkable, watching two celebrated intellectuals going at it and getting big ratings, given the fact that we now live in a time when Jeb Bush complains that President Obama uses big words …

Morgan Neville: It’s crazy, because there’s such rampant anti-intellectualism in America today. Even George [W.] Bush, who you might not think of as an intellectual, hides the fact that he went to Harvard Business School and Yale as an undergrad. Obama goes out bowling and has this aw-shucks, everyman language. Politicians pretend not to be smart.

There’s been a paradigm shift in our politics. Maybe this is my left-wing conspiracy theory, but the right has re-branded itself as kind of the everyman party: Who’s the person you’d rather have a beer with? The Republican Party, even though it’s a party of incredible wealth and corporate interests, has hidden behind this everyman quality. And I think what comes with all that obfuscation is a kind of race to the bottom. Anybody who sticks their neck out intellectually is ridiculed.

Robert Gordon: I think TV has dumbed us down. The environment where Buckley could have had a show for 33 years is gone. The dumbing down of the nation has taken the public out of the public intellectual. Those guys still exist, in universities and think tanks or whatever. But you never see them on television.

Did the networks take the wrong message from the strong ratings for those debates?
Neville: Absolutely.

Gordon: They saw that fireworks get ratings. And from then to now, it’s just been ever more shortening the amount of time before you get to the fireworks. As soon as you come back from the commercial, you know there will be more fireworks. There’s no slow burn. Now it’s just a show.

With Vidal and Buckley, it took nine debates to get to the fireworks. It’s like if the redwoods were to burn. And now it’s like flash paper: a quick flash, no content, no ash, then commercials.

Neville: It’s given rise to a whole punditocracy of people who don’t care about their opinions. I so often doubt how much people on television believe what they’re saying. They’re playing roles for think tanks or political parties or shills of whatever stripe.

Also Read: Tribeca 2013: Watch Out, Gore Vidal Was Mad as Hell Right to the End

Vidal and Buckley profoundly cared about what they were saying, and for them the stakes were incredibly high. And I feel like so much of what we have now is a cartoon version of that. Even the fireworks aren’t real. As Robert said, they’re flash paper.

How did you come to see these debates and make a film of them?
Gordon: A friend in Memphis had a bootleg copy, and I was totally struck by its potential as a documentary. I saw it articulating the culture wars of today, realized it was probably bigger than I could do by myself in Memphis, and called on Morgan’s expertise.

Neville: I think both of us instantly were like, “This is so good, and it says a lot about media and journalism and politics and culture.” In a way, it’s not a film about politics as much as it is about the culture of politics, which I find even more interesting. And we wanted to make sure it wasn’t a film about these arguments – it was a film about how we argue. Then we just had to spend years convincing other people. Nobody believed in it.

Also read: ‘Look of Silence’ Director Talks of Genocide and Guild: ‘Impunity Is the Story of Our Times’

You interviewed Vidal shortly before his death. Was it easy to persuade him to talk?
Gordon: Gore’s line is “Never say no to sex or television,” so he said yes. But when we got there, he seemed insulted that we were going to put Bill on the same plane with him.

Neville: We did a very contentious and uncomfortable three-hour interview with him. He accused us of being Buckley-ites. He just didn’t think Buckley was a character to be taken seriously, and didn’t respect us for taking Buckley seriously. So it was hard.

But as we were leaving, his servant invited us upstairs to have cocktails with Mr. Vidal. Which we…

Neville: We went upstairs and thought we were going into his salon or a den, but Gore was in his bedroom, in his bed. He said, “Please sit down, boys.” And there were no chairs in the room, so we all sat on Gore’s bed and had cocktails. And had a really pleasant conversation. I think he then really started to understand where we were coming from, but I still don’t think that he in any way bought into the premise that he and Buckley were equals.

Buckley died before you started work on the film …
Neville: I don’t think we could have made this film if Buckley were alive.

Gordon: He would never have trusted us.

Neville: And he wouldn’t have talked. He never, ever talked about it. The only person who refused to talk to us was Christopher Buckley, his son. I think Vidal’s name was not to be spoken in the Buckley household, and he was honoring his father’s intention.

Was it such a taboo subject because he didn’t like Gore, or because he had lost control in the debates?
Gordon: Gore got Bill to react in a way that Bill had made a career not acting. He’d never lost his cool. I think for Gore it was an instant victory at that moment, and for Bill it was a humiliating defeat. And thereafter, whenever Bill was asked, he would always politely demur. And whenever Gore was asked, he’d never miss the opportunity. There was very deep enmity there.

Neville: They were so similar in so many ways that I think they thought that the other was the one person in the world who could detect the insecurities that they saw in themselves. They both debated people of opposite political opinions many times, and never had anything like this on a personal level. They were each other’s bête noirs – the perfect antimatter to their matter.