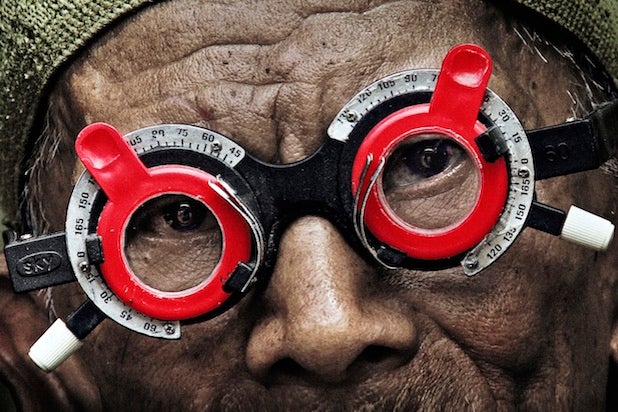 Joshua Oppenheimer’s Oscar-nominated 2013 documentary “The Act of Killing” was a surreal, disturbing film in which Indonesian gangsters acted out — in the style of movies they loved — their mass killings of communists, leftists, union workers and others in a government-sponsored purge in the 1960s. Many of the men responsible for those killings had remained in power over the years, with their killings celebrated rather than condemned both at home and internationally.

“The Act of Killing” told one side of the story; Oppenheimer’s new film, “The Look of Silence,” is a companion piece that picks up the story from the point-of-view of survivors who’d had family members murdered by people who still lived in their communities. The focus is Adi Rukun, whose brother was killed and whose parents are still haunted by that loss — and the film builds to a remarkable confrontation as Adi, an optometrist, fits one of his brother’s unrepentant killers for glasses as he tries to get the man to accept responsibility and show repentance.

Oppenheimer spoke to TheWrap shortly before Friday’s Los Angeles release of his film, which will be eligible to follow its predecessor into this year’s Oscar documentary race.

TheWrap: When we spoke about “The Act of Killing” two years ago, you said you began that film with the idea of talking to the victims, the families, the survivors, but you turned to documenting the perpetrators because the victims didn’t feel comfortable talking.
Joshua Oppenheimer: Adi was working to gather other survivors and their families. Before he met me, he had never known that in his village, every family contained one or two people who had been killed. Because no one would talk. He only knew the story of his brother’s murder, because his mother would tell it again and again and again, morning, noon and night as he puts it. And so when I met him in 2003, he latched onto my filmmaking process as a way of finding out who his family was, what his community was and who he is, in a sense.

People would come with Adi to tell me their stories, and they’d be crying out of fright and emotion just at the idea of talking. And after three weeks, knowing how vulnerable and frightened everyone was, the army came and threatened them not to talk. The people in the village called me to a secret meeting, a midnight meeting in Adi’s parents’ house, and said, “Please don’t give up. Try to film the perpetrators.” And that’s how that happened.

So from 2003 to 2005 I filmed every perpetrator I could find, working my way from this remote plantation village up the chain of command. And then in 2012, after editing “The Act of Killing” but before it had its first screening, because after that screening I could not return to Indonesia, I returned and we shot “The Look of Silence.”

At what point was it clear you were going to make a companion film?
I knew it from January of 2004, eight months into the two-year period where I was filming the perpetrators. It was when I filmed the scene where the two of the perpetrators take me down to the river and take turns playing victim and perpetrator.

It was like they were reading from a shared script, and I had to let go of this idea that they were monsters — because if there’s monstrosity here it’s collective, and it’s political. It’s impunity. And while they were helping each other down that grassy slope, taking a break from that grotesque declamation of how they killed, it occurred to me, this is like wandering into Germany 40 years after the Holocaust if the Nazis were still in power, and if the rest of the world had celebrated the Holocaust while it took place.

And I knew that this was one of many massacres that had taken place across the global south, while perpetrators remain in power and people live under authoritarian or semi-authoritarian regimes in fear. This is not something unique. This idea — what if the Nazis had won? — is not necessarily the exception to the rule. And I felt, if that’s the case, then impunity is the story of our times, and I will stop everything I’m doing to address this.

That evening I noted in my diary, “Two films.” One about the boasting of the perpetrators, the lies and the fantasies and the stories that the perpetrators tell themselves so they can live with themselves, and the terrible effects of those lies when imposed on the whole society in terms of corruption, thuggery, fear. That’s “The Act of Killing,” and it’s a flamboyant fever dream of a film. And I knew I would make another film asking, “What does it do to ordinary human beings, especially survivors who’ve lost loved ones in the genocide, to live in such a regime? What does it do to live in fear for 50 years?” And that’s “The Look of Silence.”

The film builds to the point where you bring Adi together with the perpetrators who killed his brother. What did you expect to find in that moment?
Adi first showed me a scene that he shot, which is the scene in “The Look of Silence” of his father crawling through the house lost. He did it to explain that his father was trapped in a prison of fear, and he didn’t want his children to be trapped as well — and the only way of avoiding that was for him to go meet his neighbors, the men who did this to his family.

If they can’t break the silence and acknowledge what they’ve done, he wanted to go and break the silence and try and reconcile with them, so he can build a future for his children where they aren’t afraid of their neighbors. And he felt that if he went gently, with empathy, they would recognize this as an opportunity to make peace with their neighbors, but also to be forgiven by one of their victim’s families.

I was very moved, but first I said, “Absolutely not, we won’t do it.” There has never been a film made where survivors confront perpetrators who are still in power. But I talked about it with my crew, and they said, “You know, Joshua, the production of ‘The Act of Killing’ is famous in this region, because you had the most powerful men in the country dramatizing perpetrators’ memories of genocide. I was known to be close to the highest-ranking perpetrators and politicians in the country, but no one had seen the film yet, so those high-ranking people were not yet hating me and threatening me.

So we realized that the men Adi wanted to meet would be unlikely to detain us, let alone attack us, because they would not want to offend their superiors, who they thought were close to me. So it might be possible to do these confrontations.

But I didn’t expect the apology, and I told Adi that. I worked five years with [mass killer] Anwar Congo, and at the end of that time, he was retching over his own guilt, but even then he said, “I killed because my conscience told me they had to be killed.” So even when he’s retching, he’s clinging to the lie that he believed it was right at the time.

I told Adi, “I don’t think we’ll get the apology – but if I do my job well, if I capture with precision, intimacy and humanity the complex human reactions that are inevitable when someone goes into someone else’s house and says, ‘You killed my brother, will you take responsibility for that?’ – that is, if I can capture the panic, the shame, the guilt, the fear and whatever defensive reaction happens, then we can make visible the abyss of fear and guilt that divides everybody in this society.”

We can succeed through the film as a whole, maybe in a bigger way, even if we fail in the individual confrontation.