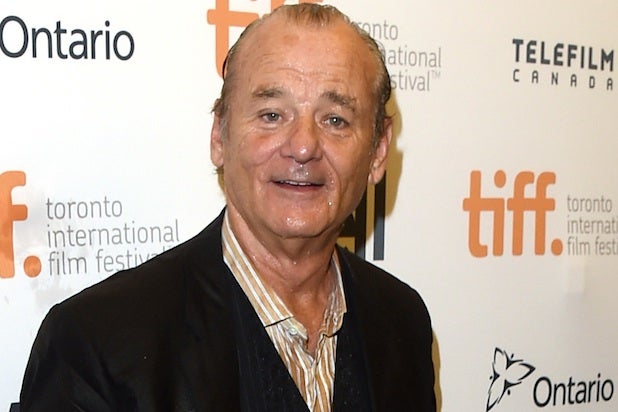 Bill Murray Day at the Toronto International Film Festival started out hot and muggy — but by the time the day-long celebration concluded with the world premiere of “St. Vincent,” an evening thunderstorm had turned the long line of patrons waiting to fill the Princess of Wales theater into a soggy mass of wet hair and damp socks.

And while the festival’s artistic director, Cameron Bailey, called the rain “a gift from Bill Murray, so we should all be thankful,” in fact the storm (and a very-delayed start in letting people into the theater) turned at least some comedy fans into soggy cranks.

That was entirely appropriate for “St. Vincent,” a veritable symphony of Bill Murray‘s trademark crankiness.

Playing an aging sourpuss who reluctantly agrees to babysit the timid son of his new next-door neighbor because he needs the money, Murray offers a compendium of bad-role-model behavior: He drinks, smokes, takes the kid to the racetrack and to bars, threatens school bullies with a tire iron and hangs out with a pregnant Russian hooker played broadly and energetically by Naomi Watts.

As the boy’s mother, Melissa McCarthy is far more restrained than usual; her character is largely passive, not aggressive. The actress freely relinquishes the big comic moments to Murray, and he knows just what to do with them.

For the first half of “St. Vincent,” the film plays like an updated version of the old Murray movies that screened earlier in the day: “Stripes,” “Ghostbusters” and “Groundhog Day.” It’s all about watching Bill misbehave, which he does with the kind of deadpan aplomb that has made him the kind of guy who warrants a Day in Toronto.

But “St. Vincent,” written and directed by first-time director Theodore Melfi, wants to be more than that. This is a movie with Life Lessons on its mind, one that takes a turn halfway through to become more serious and more sentimental.

Judging from the sniffles in the crowd and the prolonged ovation afterwards, the sentiment worked for many. And while the role is unlikely to be an awards magnet the way Murray’s more nuanced performance in “Lost in Translation” was, it could clearly figure into the awards race via the Golden Globes comedy categories.

But Murray probably summed it up in the post-screening Q&A when he talked about what he wanted to achieve with the movie. “I thought, if we could just avoid being schmaltzy, you know?” he said, and then shrugged. “We almost did. We almost did.”

That almost is accurate, and it could be a sticking point for some. The transition from gutbusting to heartwarming is a tough one to negotiate, particularly for a first-time director who, Murray joked, “didn’t know anything” when he started shooting.

The man of the day was clearly the hit of the Q&A, from his opening line about how he was cast because Melfi “couldn’t get Jack Nicholson” to his final admonition to the adoring audience.

“I’d just like to say something,” he said, before pausing and acting as if he’d lost his train of thought. “What would you like me to say?”

He looked around the room. “Where are we? I know I’m not at home, but where are we?”

He was quickly reminded: It was Toronto, of course. And it was Bill Murray Day.