You could make a case for either one after the film’s press screenings and Cannes premiere this week , which resulted in a bunch of mostly positive reviews, a handful of naysayers and one seriously heated Internet debate that devolved into (literal) name-calling and (figurative) foot-stomping.

Before the screenings, expectations were high. Throughout a festival lineup that many found uninspiring – despite well-received offerings like Mike Leigh’s “Another Year” and the documentary “Inside Job” – numerous Cannes-watchers had looked ahead to the new film from Inarritu, director of “Amores Perros” and the Oscar Best Picture nominee “Babel.” 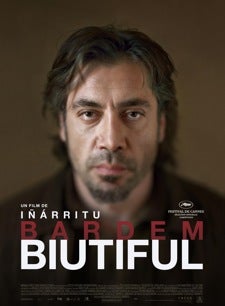 But the Mexican-born director can also be a divisive filmmaker, with some put off by the intricate (some say labored) web of connections he weaves among his characters.

So by the time it had its initial press screening at 8:30 a.m. on Monday, and then its premiere on Tuesday, “Biutiful” was facing high hopes: As Jeff Wells wrote, “Some believe that the Barcelona-set drama with Javier Bardem is the last best hope of the festival for a serious home run.”

TheWrap’s Sharon Waxman, for one, was impressed, leading her piece on the film by writing, “Cannes finally turned interesting on Monday with the debut of a piercing work by Alejandro Gonzalez Inarritu, ‘Biutiful,’ starting Javier Bardem in a performance that left audiences in tears and applause.”

Elsewhere, the reaction ranged from delight to indifference, from the Hollywood Reporter’s “It’s the kind of film that makes you realize why coming to Cannes is so essential” to Variety’s “Its scant emotional rewards can’t shake off the sense of a prodigiously gifted filmmaker stuck in a grim rut.”

Wells called it “a sad and deeply touching hard-knocks, lower-depths drama in the tradition (or along the lines, even) of Roberto Rossellini’s ‘Open City’ or Vittorio DeSica’s ‘The Bicycle Thief.’" But at In Contention, Guy Lodge dubbed it “the least involving and most self-involved film of the director’s career.”

At the moment, the film stands as the second most divisive film in the short history of indieWIRE’s criticWIRE poll, trailing only Harmony Korine’s “Trash Humpers.” Among the critics polled, Sasha Stone gave it an A+; Robert Koehler gave it an F. In between: an A, an A-, two C+s, two C-s, and a D+.

And Anne Thompson, who liked the film quite a bit, was left wondering what its commercial prospects could be: “This movie will be lucky to land a micro-distributor, much less Sony Pictures Classics or Focus. … A movie like this needs a tsunami of critical praise to draw any audience at all. It will be lucky to pass the $1 million mark in the U.S.”

Meanwhile, the L.A. Times suggested the Weinstein Company, certainly bigger than a micro-distributor, will probably make a deal for the film (and that Sony Pictures Classics likely will land “Another Year”).

In other words, reaction was all over the map. And that’s when things got ugly.

When the indieWIRE critics poll initially gave the film a B average (it’s since dropped to a C+), Wells jumped to its defense with an indignant post accusing indieWIRE of “trying to bully” fans of the Gonzalez Inarritu film, calling it “a sad and highly poetic little film that needs all the intelligent support it can get” and charging, “And yet certain dweeb types have, it seems, gotten together and decided to dismiss it.”

And then things died down, tempers cooled, and everybody went back to looking for the festival’s next last best hope.