Kino Lorber has acquired the North American distribution rights to “Bloom Up: A Swinger Couple Story,” an intimate and romantic documentary about the life of sex-positive swingers, TheWrap has learned exclusively. Kino Lorber also released the colorful, stylish and sexy first trailer for the film, which you can watch above.

Filmmaker Mauro Russo Rouge’s “Bloom Up” made its world premiere at the 2021 Hot Docs Documentary Film Festival, and Kino Lorber is planning a theatrical release just head of International Swingers Day on Aug. 13.

While shooting and directing “Bloom Up,” Russo Rouge spent a year immersed in the swinger lifestyle of his subjects. He follows an Italian couple of Hermes and Betta who are pet shop owners by day and swingers by night. Rouge was even allowed access inside the couple’s bedroom; the film also explores the fascinating but strange logistics of organizing sex parties, making for a complex portrait of this specific kind of relationship. 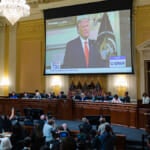 The film was acclaimed for its rich visual style of sensual cinematography that never feels vulgar or exploitative of the couple in question. It can be seen plainly in the trailer, which shows Hermes and Betta passionately kissing inside a pink bathroom filled with balloons, a parade of bodies in lingerie on a runway and one man even trying on a black g-string.

“With this candid, vulnerable and tender portrait of a relationship, Mauro has captured how there is so much more to the swinger lifestyle than just sex,” Kino Lorber SVP Wendy Lidell said. “Though he shows us many intimate moments between his subjects, it’s the emotional nakedness on display that stays with the viewer. We’re so pleased to share this documentary with North American audiences.”

“I’m excited about Kino Lorber’s acquisition of the film. In the last few years, they have distributed films by Abel Ferrara, Gianfranco Rosi, Yuri Ancarani, Pietro Marcello, and Bruno Dumont, and it’s a great privilege for me to be in this company. I am sure that ‘Bloom Up’ will attract not only the so-called ‘horizontal’ audience, but also the more ‘vertical’ ordinary viewers,” the film’s director added.

The deal for “Bloom Up: A Swinger Couple Story” was negotiated by Lidell and Marco Urizzi, head of sales for Wide Management. 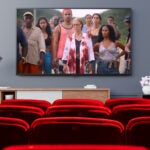