Any hack filmmaker can score cheap emotional points by rubbing our collective noses in real-life tragedy and horror. An artist, on the other hand, can take an awful event and use it as a window to look inside the human experience by taking a step back and presenting how the seemingly unthinkable can become all too true. 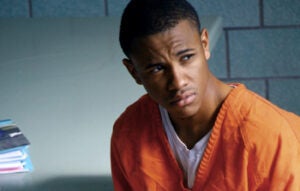 That’s what screenwriter R.F.I. Porto and director Alexandre Moors have accomplished with “Blue Caprice,” a film that explores the D.C. Sniper shootings of October 2002 from the point of view of the perpetrators. The movie never lets the killers off the hook for their disgusting act, and it never exploits the tragedy by lingering on the bloodshed.

It’s too easy — and it collectively lets all of us off the hook — to dehumanize two men who shot 13 innocent civilians. It’s the exploration of their human frailty and their brokenness, and the step-by-step examination of the events that would lead to this barbarity, that give “Blue Caprice” its intensity.

Teenager Lee Boyd Malvo (Tequan Richmond, “Everybody Hates Chris”) and Army veteran John Allan Muhammad (Isaiah Washington) first meet on the island of Antigua — Malvo is upset over being once again abandoned by his mother, who has gone elsewhere to find work, while Muhammad is secretly and illegally vacationing with his young children, of whom he has lost custody.

The boy who needs a parent and the father who has been deprived of his children strike a chord, and soon Muhammad is bringing Malvo with him back to the states. As the Caribbean teen adjusts to rainy Tacoma, Muhammad — who has changed his last name not because of religion but as a way to get around his ex-wife’s restraining order — starts pushing Malvo further and further to prove his allegiance.

There’s an unsettling father-son vibe between the two, yes, but also one of indoctrination that calls to mind cults and brainwashing. When Muhammad ties Malvo to a tree in the rain and forces him to find his way back home, or makes him shoot random individuals as a testament of his feelings toward his father figure, you’ll be reminded of Paul Schrader‘s “Patty Hearst” or the recent “Martha Marcy May Marlene.”

Once the men pile into the titular vehicle and head to the capital for their shooting spree, “Blue Caprice” wisely avoids filming the slayings in a way that would make us empathize with the killers. Rather than P.O.V. shots through a rifle scope, Moors shows us Malvo’s face, or the aftermath of a moment of violence, while the panicky 911 calls play on the soundtrack. (Whether these are the real calls or reenactments, they’re effectively unsettling.)

While the film doesn’t explicitly address the national mood of panic set off by the D.C. Sniper shootings — coming a year after 9/11, when anthrax-laden letters were still turning up on Capitol Hill and the nation’s nerves were on orange alert — it perfectly captures the distress and fear of random violence left in their wake.

The powerful performances of Washington and Richmond play an essential role — Washington’s chilling work reminded me of Eric Roberts in “STAR 80,” putting a human face on a monstrous killer. Washington guides us down the rabbit-hole of Muhammad’s increasing paranoia and bitterness, showing us the infected soul inside.

Richmond captures the neediness and the loneliness of this kid; when Muhammad comes along and pays attention to him and takes him to the U.S. and teaches him how to be a soldier, how could this neglected adolescent resist? Without making excuses for Malvo’s deeds, both the actor and the film offer valuable insight into what put him into that car with those guns.

For a first-time feature filmmaker, Moors displays an assured hand, from casting indie veterans (Tim Blake Nelson, Joey Lauren Adams, Leo Fitzpatrick) in small but essential roles, to using cinematography (by Brian O’Carroll) and the score (by Colin Stetson and Sarah Neufeld) to maintain a tone of dread and unease throughout.

There’s a striking scene toward the end of “Blue Caprice” where Malvo’s court-ordered attorney interviews him and tries desperately to find some kind of logic, some sort of motivation that could explain this seemingly arbitrary act of violence. The movie knows better than to expect a simple answer, but it nonetheless boldly attempts to answer the question.