There are several reasons why “Bob’s Burgers” has been on the air for over a decade and why the Fox mainstay has such a huge fan base. The show is about a relatable couple trying to run a small restaurant, pay their bills and raise their kids. Although scripted, the half-hour comedy allows the voice actors to improv, allowing for authentic comedic timing rare in an animated series. And most notably, “Bob’s Burgers” is really a long-running musical that happens to be a comedy.

“The Bob’s Burger’s Movie,” the first feature for the franchise, doesn’t stray too far from this formula and adds a whodunnit murder mystery complete with dance numbers, zombies, carnies, and a robot UFO to the plot. The film succeeds in introducing the world to Bob Belcher (H. John Benjamin), his wife Linda (John Roberts), and children Tina (Dan Mintz), Eugene (Eugene Mirman), and Louise (Kristen Schaal), but longtime fans of the show will feel at home with the characters’ particular brand of quirky displayed here.

The film takes place the week before school lets out, and Bob is trying to stretch their funds until the summer crowds hit Wonder Wharf, the seaside attraction up the block. Unfortunately, the business has been so slow he won’t be able to cover both the rent and their upcoming loan payment, and he’s low-key freaking out. Linda, his wife — ever the optimist — suggests that they have a chat with the bank, and in true Bob fashion, he decides to make the loan officer a special burger for the occasion. With only a week before their payment is due, Linda also asks their wealthy landlord Calvin Fischoeder (Kevin Kline), who owns half of the town, to waive their rent for the month. He declines, but not before a massive sinkhole opens right in front of the shop. 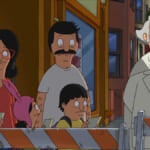 While Bob slowly unravels, his family and friends, including hapless handyman Teddy (Larry Murphy), all try to come up with a way to raise the money. Things go from bad to worse when curious and chaotic 9-year-old Louise investigates said sinkhole and uncovers an unsolved murder that points to Fischoeder and his spoiled sibling Felix (Zack Galifinakis). The kids realize that if Fischoeder goes to jail, he can’t save the restaurant, and they set out to prove their landlord’s innocence.

“The Bob’s Burgers Movie” is best when it sticks to the original recipe, a family dealing with real-life problems in unorthodox ways. For instance, Bob has a conversation with a “practice burger” he’s making to perfect a recipe. Linda dons her son’s “burger suit” complete with bikini to help sell burgers on the boardwalk after Teddy fashions the restaurateurs a street meat cart from scraps.

Then there are the children, who have very vivid imaginations when left to their own devices, like Tina, the oldest, who regularly daydreams about horseback riding with her crush-along with a small contingent of zombies. Middle child, Eugene, wants to be in a band so bad that he fashions himself a percussive instrument out of a napkin holder and spoons and creates an entire band backstory. The most grounded one of the bunch is Louise, the youngest and most fearless member of the Belcher clan. She suspects a member of the local Wonder Wharf carnival troupe of the crime and ends up in a spectacular call and response dance number that will make you want to pick up the soundtrack.

The musical numbers, although fun, are only in the first two acts, leaving the film feeling a bit top-heavy and off-pace later on. The whodunnit portion of the fourth act is somewhat predictable, but the audience knows more than the characters in true “Bob’s Burgers” fashion. So half the fun is watching them figure it out. In fact, eagle-eyed fans will have noticed the sinkhole itself has been teased throughout the last season, as the sidewalk in front of the store on the series showed signs of wear.

A few series of regulars pop up, including Darryl (Aziz Ansari), Chloe (Stephanie Beatriz), and Sgt. Bosco (Gary Cole) and all Pesto kids appear, including the twins. However, their Dad, Jimmy Pesto, is only briefly seen but not heard.

Another huge reveal fans will be thrilled about is why Louise wears her famous pink bunny hat all the time, and how amazing her parents are for never forcing her to take it off.

With a runtime of just under two hours, “The Bob’s Burgers Movie” feels like an extended episode of the series with a musical number that missed its cue. Definitely leaning towards the darker humor end of the comedy spectrum, fans will get a kick out of all of the easter eggs and callbacks. And newcomers will enjoy the animated movie for what it is, a fun summer movie adventure with a Scooby-Doo-like mystery thrown in. 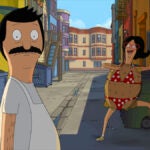