Gaming fans got their first look at the “Borderlands” movie adaptation, with Jamie Lee Curtis snapping a sleek, behind-the-scenes photo of star Cate Blanchett as Lilith, one of the game’s most beloved characters.

“Welcome to BORDERLANDS & a secret BTS shot I took of Lilith, our legendary heroine, psycho blasting, vault hunting vixen with a bad attitude,” Curtis said in a tweet.

Fans instantly recognized the photo as Lilith, but since it’s just a black and white silhouette of Blanchett that Curtis photographed herself, fans are already demanding more.

“The tease!! Thank you sm, Jamie!! We can already feel her power!!! No doubts she’s gonna look SO GOOD!!! Can’t wait to see MORE,” one tweeted in response.

“Borderlands” is directed by Eli Roth and is a film version of the game trilogy in which players take on the roles of “Vault Hunters” on a planet called Pandora who battle against local bandits and marauders in their search for a hidden vault rumored to contain advanced alien technology.

Blanchett stars in “Borderlands” as Lilith alongside Kevin Hart as the character Roland, Edgar Ramirez as arms dealer Atlas, Curtis as the scientist Tannis, Ariana Greenblatt as pre-teen demolition expert Tiny Tina, Florian Munteanu as musclebound protector Krieg and Jack Black as the voice of the wiseass robot Claptrap. 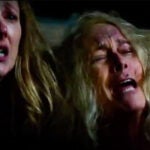 In the film, which is written by Aaron Berg and Craig Mazin, Blanchett’s Lilith is an infamous treasure hunter with a mysterious past who reluctantly returns to her home planet of Pandora to find the missing daughter of Atlas, the universe’s most powerful S.O.B. But she’s forced to team up with this ragtag group of misfits and take on alien monsters and bandits in order to find the missing girl, who may hold the key to unimaginable power.

The game series is from Gearbox Software and is published by 2K, and Gearbox executive Randy Pitchford told TheWrap just how closely the studio is working with Lionsgate on the “Borderlands” movie. The three games in the franchise have sold 68 million units worldwide. “Borderlands” is filming now and is expected for release from Lionsgate in 2022.

Check out some of the online reaction to Curtis’ reveal of Lilith below: