In a scenic, rainy Welsh town, with just as many sheep as people, there was a man who made himself a best friend. The man is Brian (David Earl), and the friend is Charles (Chris Hayward).

Together, they do normal things: watch television, enjoy meals, take long walks in the countryside. The only odd thing, the only thing that would set them apart from anyone else in their town or any other one, is that Brian is a man, and Charles is a robot he invented.

This is the plot of the aptly titled “Brian and Charles,” a big-hearted buddy comedy about two misfit friends directed by Jim Archer in his feature debut. Earl and Hayward developed these characters first as a live stand-up show and then in a short film, and natural chemistry and cheeky rapport make “Brian and Charles” a laugh-out-loud comedy. 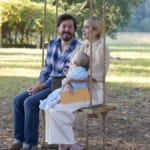 They’re a bit of an odd couple, these two: Brian is geeky and eager, a man living in profound isolation who is aching to connect but afraid to do so. In the film’s early first act, a mockumentary style frames Brian’s life, his inventions and his loneliness. He’s an outcast, hurt by the world, afraid of many aspects of modern society. He’s stubborn, too, unwilling to change his ways to better adjust to his world. Why should he have to change? The world should come to him, and it does upon his invention of Charles.

Charles, in contrast to his meeker creator, is big and proud. His body consists of a washing machine, an old mannequin head springing out of the top. At times, the face of Charles (whose mouth does not open and close so much as it does puff in and out) resembles a Jim Broadbent whose all-too-smooth face has been put through half a dozen smoothing Instagram filters. His voice is automated, deep and excitable. He can barely pronounce “Brian,” instead giving it a flat “Bran.” He looms large over Brian, but there isn’t a dangerous bone in Charles’ misshapen body. Mostly he’s like a baby, eager to learn about the world. The result is strange and very, very funny.

Like many shorts-turned-features, the charms of “Brian and Charles” may feel stretched thin. A lot of this film leans on how funny Charles’ automated voice sounds as well as the bulkiness of his body. It’s by and large a one-joke premise, especially because the world of Brian and Charles is so underdeveloped. Brian’s village is small, and isolated as he is, he doesn’t know a lot of people outside of Hazel (Louise Brealey, “Sherlock”), the parrot-owning daughter of a woman he works for, as well as the local shop owner. The two share a budding romance, which is sweet, but one is left to wonder if they were the only single people their age in the town. 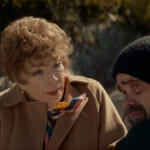 Brian loathes his neighbors, a family of four led by frightening patriarch Eddie (Jamie Michie). Eddie and his family are the village bullies, brusque and wild. It’s here where “Brian and Charles” falters a little: the issues between Brian and Eddie are immature and vague. The world in general is full of a kind of childlike naïveté; perfect, perhaps, for a young robot to learn to be in the world, but frustrating for the surrounding adults. Like any work by comedians, “Brian and Charles” shines more when it’s being funny than when it’s angling towards the platitudinal or maudlin.

Perhaps if the mockumentary style held longer than the first act, it would be possible to know more about the world that Earl and Hayworth have invented, but once the film focuses on more than one character, the to-camera asides vanish. The lack of consistency in style is a bit disorienting, and the faux-documentary style never justifies its own existence. It’s a useful framing device, though it serves little narrative function, and occasional attempts to break the fourth wall fall flat.

“Brian and Charles” is at its most confident and inventive when the two friends are together, talking and learning about the world from each other. There’s joy for the world, even a rainy and quiet one. Earl and Hayward’s optimistic debut finds a great deal of humor in the mundane and regular, that a friend can come from anywhere or anything, even an old washing machine.