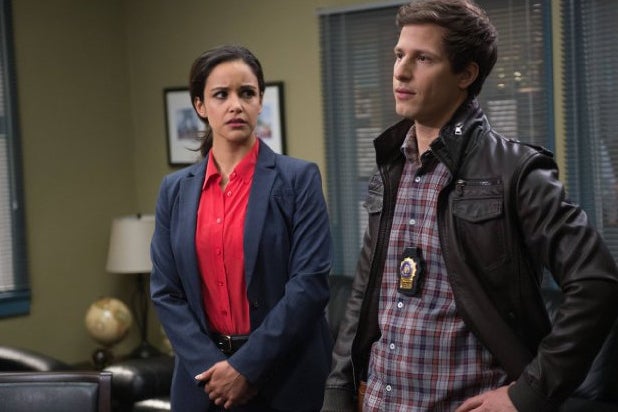 Sunday’s “Brooklyn Nine-Nine” Season 2 premiere picks up where the faux NYPD precinct closed its first season: As Det. Jake Peralta (Andy Samberg) has infiltrated the mafia in an undercover FBI assignment. But, it also opens with a preexisting elephant still in the room, as Samberg’s character has declared his “romantic styles” intentions with fellow detective Amy Santiago (Melissa Fumero).

Unfortunately for Peralta, Santiago is still in an actual, real relationship. Fortunately for fans, it leads to some super-awkward scenes, which few people champion better than Samberg.

Fumero says shooting the scenes were quite the opposite. “It’s a nice reunion when [Peralta] comes back to the squad, which was also just fun for us to shoot because we were also reunited after being on hiatus,” Fumero told TheWrap.

TheWrap previewed the upcoming season with the actress involved in the Golden Globe-winning show’s “will they-won’t they” plot, Fumero, whose character has stayed busy mindlessly running drills for Captain Holt (Andre Braugher) alongside the rest of the squad. No one in the Nine-Nine knows why they’re buried under the busy work, a mystery that perhaps only missing star detective Peralta could solve.

In the legend-in-his-own-mind’s absence, however, Fumero promised: “The precinct hasn’t completely fallen apart.”

When the full gang finally gets back together this weekend, it will be in the series’ new Sunday timeslot, something that Fumero is pretty keen on.

“We’re really excited about it,” Fumero said, of the move from Tuesday. She added: “I love ‘New Girl’ and ‘Mindy Project’ so I was really happy to be with them last year, and we will definitely miss them.”

“But Sunday nights I think is in-line with the humor of the show a little bit more,” Fumero continued. “I think it does make a little bit more sense to have us with ‘The Simpsons’ and ‘Family Guy.'”

She added, “And it’s football Sunday, so I think going from watching football to watching a bunch of comedy and laughing your butt off is a much smoother transition than watching football and watching something super dramatic and intense like everything else on Sunday nights.”

On where her on-screen chemistry with Samberg could lead, Fumero was a little more coy. If her character plays it as cool, she may miss out on an opportunity with the goofy Peralta. After all, this season Eva Longoria is guest-starring as a love interest to Samberg’s Fox alter ego, butting in on the naive Santiago’s turf.

When TheWrap asked about the former “Desperate Housewife” potentially stealing her thunder, Fumero would only tease the following: “Let’s just say that … she and Jake having their thing … it’s not going to be what you expect.”