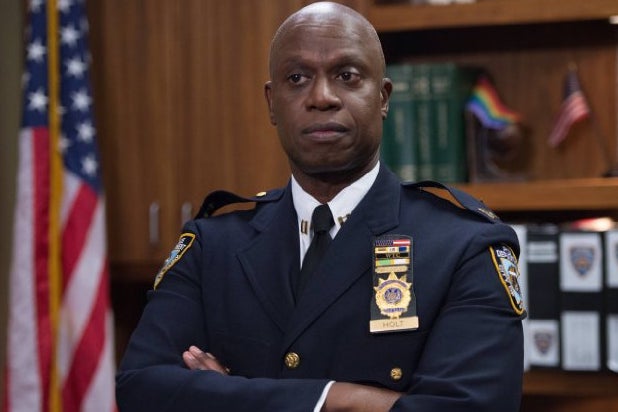 “Brooklyn Nine-Nine” burst onto the scene in its freshman season, upsetting the more-established Golden Globe competition in 2013 and winning a Best TV Series – Comedy or Musical trophy. Star Andy Samberg also stole the award for lead actor in a comedy. Both were deserved victories.

But just when TV critics thought the Fox comedy might storm the Emmys, it wasn’t even nominated and neither was Samberg. However, Andre Braugher was, making the short list for Outstanding Supporting Actor in a Comedy Series.

Braugher, who already has two Emmys (“Homicide: Life on the Street” and “Thief”) — all but gave away his potential third to Fred Armisen in the below interview with TheWrap. As much as we love the “Portlandia” star, however, we’re not so sure he’s a shoe-in, especially with Braugher, Tony Hale and Ty Burrell cluttering the category, among others.

We’ll see whose name is in the envelope on Aug. 25. Until then, here are eight questions with the man behind “Brooklyn Nine-Nine’s” Captain Holt:

TheWrap: What was the toughest thing you had to do this season?
Braugher: Like stunts? Is that what you mean?

Sure, if you do your own stunts, or if it’s simply not breaking character while crazy shit is going on around you?
Oh, that is the hardest thing about the whole season. I pride myself on being a stoic, but it’s a really good crew–and when I say crew I mean everybody in front of the camera and behind–and the spirit is good. We have a lot of fun.

One of the hardest things is now that I’m out of the very serious roles that I’ve inhabited before is, these guys are funny.  They say a lot of crazy stuff and the hardest part really is keeping a straight face.

I guess we are three or four episodes in [to Season 2] and I’ve only broken once. So I’m a little bit behind my pace. I only broke three times last year out of 22 episodes, so I’ve got about twice as many episodes to go before I am back on pace, but I’m doing pretty well.

Can you tell us what made you break that one time?
We were in a bar…Oh no! It’s twice I’ve broken! Wow, I’m really behind pace.

So the first time was in a bar. They all had to guess what Holt had written on a sign but he had written it so poorly that they came up with  guesses. Because they used this one, I’m not going to tell you what Stephanie Beatriz [Detective Rosa Diaz]  says, but she is an excellent comedian with a great imagination and she broke me up in the bar.

[Guest actress] Kyra Sedgwick broke me up a week ago because she came in with this really intense scene … She was tossing a baseball back and forth and popping her gum while doing the scene. It just cracked me up because in my mind she was still “The Closer.”

“Brooklyn Nine-Nine” gets a lot of accolades but not high ratings — it’s kind of a word-of-mouth show. If somebody has never seen your show before, how would you sell them on it?
You are going to see an astounding universe of lovable goofballs who figure it out on a weekly basis.

Which episode did you pick as your Emmy episode and why?
I picked the episode called “Christmas” because I’m kind of crazy about the character they call Young Holt, the detective from the ’80s who is such a bad ass, and Young Holt makes a couple of appearances in that episode.

Do you think we’re currently in the “Golden Age” of TV?
I’d have to say it’s the Golden Age. It’s the Golden Age and there is a lot of TV. There is so much content out there today that you would think it’s just an endless sea of content, but in fact the shows that are on television — I’m talking about [both] cable and broadcast — represent an incredible outburst of creativity and imagination.

My mind goes to the drama world. A show like “Breaking Bad” or “Sons of Anarchy,” these are shows — you just couldn’t do shows like this 10-15 years ago. Breaking rules was just not possible 25 years ago. Now the expectation of rule-breaking is built into the show. Everybody wants to know basically how the next show is going to push the envelope. If it’s a “Blacklist” or a “Breaking Bad” kind of show, there is a lot going on and the rule-breaking and the envelope-pushing is astounding today compared to what it was 25 years ago.

Let’s say you’re an Emmy voter. You can’t vote for yourself you can’t vote for anyone on “Brooklyn.”  Who would be at the top of your ballot, show-wise or actor-wise? Who are you liking this year?
I am going to vote for my gal Kerry Washington. For comedy actor it would have to be Fred Armisen of “Portlandia” because he’s a funny comedian, but he is such a nice guy.

What can you tell us about Season two?
Peralta (Samberg) finishes his undercover investigation, so the squad is reunited. My arch rival appears, played by Kyra Sedgwick. Amy Santiago (Melissa Fumero) and Jake Peralta continue their love affair, however stop and start it is. Charles Boyle (Joe Lo Truglio) and Gina Linetti (Chelsea Peretti) continue their love affair–their secret, shameful love affair.

We get a new commissioner, so there’s a lot of reorganization and rule-changing inside the NYPD. As far as I know, Peralta is resisting this change and Holt is embracing it.