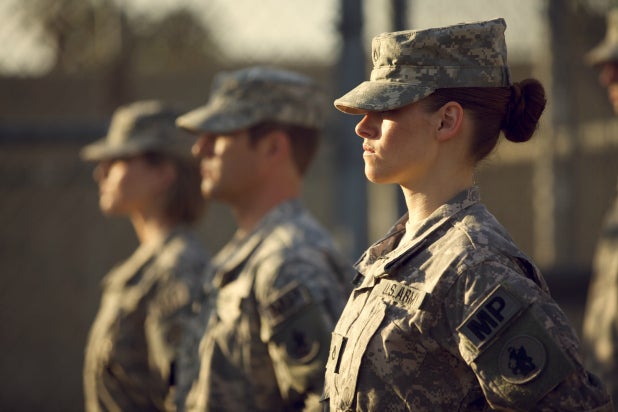 Stone walls do not a prison make, nor does a promising concept necessarily guarantee a satisfying film. “Camp X-Ray” has a great idea behind it — a young female soldier assigned guard duty at Guantanamo Bay forms a kinship with one of the incarcerated Muslims — but first-time writer-director Peter Sattler doesn’t go anywhere interesting with that notion.

Neither the soldier nor the detainee (never call them “prisoners,” we’re told early, lest the the Geneva Convention apply) emerges as a particularly memorable character, and while the ongoing situation at Gitmo is a fertile topic for discussion, Sattler doesn’t bring much to the conversation.

That’s certainly not the fault of the actors, who labor to bring depths to the roles not provided by the script. Kristen Stewart stars as Amy, a young woman looking to shake off the dust of her small Florida town and to see the world in the U.S. Army. Alas, her first big assignment takes her not very far from home, as she becomes part of a unit that monitors detainees 24/7.

She leaps into the gig with gusto, volunteering on her first day to help restrain a prisoner (getting punched in the face for her trouble). It’s on the second day, when she’s pushing the library cart down the hallway, that she has her first encounter with Ali (Payman Maadi, “A Separation”), whom we see in flashback unloading a bag of cell phones before someone places a black bag over his head and renders him extraordinarily.

Ali complains loudly and with frequency that the library doesn’t have the final Harry Potter book — he really needs to know whether or not Snape is a bad guy — and dismissively refers to Amy as “Blondie.” (The other prisoners are more strict about religious laws separating the genders and tend to ignore her altogether.)

Even though he splashes her with a cup of his own filth, Amy finds herself getting drawn into conversations with Ali, despite Cpl. Ransdell (Lane Garrison, “Prison Break”) having warned soldiers not to share any personal information with the detainees. (Given Amy’s southern twang and the narrow windows through which prisoners and guards can look at each other, the setup is very “Silence of the Lambs,” the familiarity of which isn’t improved by Amy telling Ali to stop Hannibal Lector-ing her, a reference he of course doesn’t get.)

The idea of a woman in this man’s army — Amy feels more and more marginalized under the thumb of the sexist Ransdell — identifying with the plight of a detainee works on paper, yes, but “Camp X-Ray” never makes the bond between this particular woman and this particular prisoner feel genuine or organic. Their relationship (platonic, obviously) smacks more of screenwriter contrivance than of two put-upon souls finding each other under duress.

Playing a soldier means a great deal of emotional restraint, which means another very internal, frequently stone-faced performance from Stewart. She’s effective and empathetic, but it’s not the sort of work that takes her too far from her “Twilight” wheelhouse. Maadi gets a little more room to play different shadings, but he’s also saddled with the clunkiest, let’s-explain-the-symbolism-to-the-audience lines.

While I have no idea how much the set resembles the actual facilities at Gitmo, director of photography James Laxton (“Tusk”) and production designer Richard A. Wright (a frequent collaborator of David Gordon Green, one of the film’s executive producers) accentuate the relentlessly bright fluorescent lighting on the bland, functional surroundings. Had that same bland functionality not spilled over into Sattler’s screenplay, he might have been onto something here.