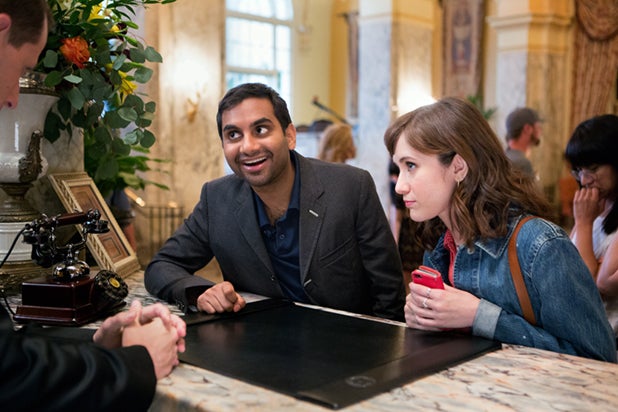 Aziz Ansari became a household name on NBC’s “Parks and Recreation,” playing the over-the-top entrepreneur Tom Haverford, but now that his Netflix comedy “Master of None” debuted to rave reviews, could he be a serious Emmy contender?

“Master of None” was universally acclaimed when it hit the streaming platform in November, with the first season scoring a 100 percent “fresh” rating on Rotten Tomatoes. Critics hailed the series for its diverse cast, incisive commentary on race in America and nuanced portrayal of millennial romance.

But the series will have some stiff competition if it hopes to score and Outstanding Comedy Series nod. Of last year’s seven nominees, only “Louie” and “Parks and Rec” are ineligible this year, and “Modern Family,” “Veep,” “Silicon Valley,” “Unbreakable Kimmy Schmidt” and “Transparent” all stand a good chance of scoring a repeat nomination.

And even if those five veteran series can’t score another nod this year, there’s still HBO’s “Girls,” Comedy Central’s “Broad City,” Hulu’s “Casual,” and Amazon’s “Mozart in the Jungle” and “Catastrophe” to contend with. It’ll also face competition from the broadcast side, including ABC’s “black-ish,” Fox’s “Last Man on Earth,” CW’s “Crazy Ex-Girlfriend” and previous nominee “The Big Bang Theory.”

As with “Crazy Ex-Girlfriend,” the best chances for “Master of None” probably lies with its co-creator and star. Ansari has already received some awards recognition at both the Golden Globes and Critics’ Choice Awards for his performance as Dev, an aimless New Yorker trying to navigate life and dating in his late-twenties, and that momentum will likely carry over to the Emmys in September.

Recent rule changes at the Emmys could also prove helpful. The writing and directing categories have both been expanded from five to six nominees, giving Ansari’s series a chance to sneak in, with the bulk of the episodes co-written by Ansari and co-creator Alan Yang. Both the writing and directing categories have, in the past, opened themselves up to series that did make the Oustanding Comedy category, including Fox’s “Last Man on Earth” and Showtime’s “Episodes.”

All together, it seems unlikely that “Master of None” will be completely ignored by the Emmys, with a few categories where the beloved series could make a strong case for itself. But even if it doesn’t, the show has already been renewed for a second season.