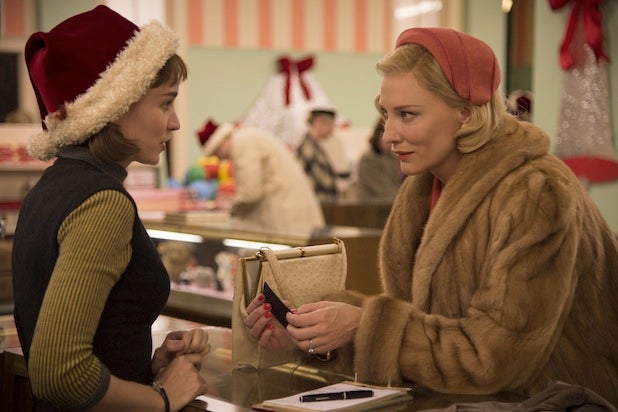 Todd Haynes‘ “Carol” has been named the winner of the 2015 Queer Palm award, a prize given to a Cannes film that deals with LGBT issues.

“Carol,” which is adapted from a Patricia Highsmith novel and stars Cate Blanchett and Rooney Mara as two women who fall in love in early 1950s New York, is by far the highest-profile film at this year’s festival to deal with gay and lesbian themes.

It is also one of the most acclaimed films at the festival, and a strong contender for the Palme d’Or, which will be announced on Sunday.

Also read: A Look at Cannes Sensation ‘Carol': This Is Where Gay Rights Began, in Part

“‘Carol’ is both a beautiful miniature and a majestic romance; it’s set 60 years in the past, but it’s for now,” wrote TheWrap after its Cannes debut on May 16.

Yorgos Lanthimos’ “The Lobster” received a special mention from the jury.

Queer Palm organizers singled out a number of Cannes films to compete for the prize. In addition to “Carol,” contenders included “Marguerite & Julien” from the main competition; “Amy” and “Love” screening out of competition: “Dope,” “Much Loved” and “Mustang” from Directors’ Fortnight; “Les Deux Amis” and “The Wakhan Front” from International Critics’ Week; and “De l’ombre il y a” and “Pauline s’arrache” from the Association for the Diffusion of Independent Cinema (ACID) showcase.