In today’s roundup of Cannes news ‘n’ notes from around the web, stars are scarce and viewers are falling asleep … but it’s still Cannes.

The Irish bookmaking firm Paddy Power places odds on which film will win the Palme d’Or, and then sends out a press release announcing the results. They have the last film to enter the competition, Ken Loach’s “Route Irish,” as the favorite at 3/1 odds. (Hmm … an Irish company installs a movie called “Route Irish” as the favorite. Go figure.) Alejandro Gonzales Inarritu’s “Biutiful” is second at 4/1, followed by Mike Leigh’s “Another Year” at 5/1 (two Brits in the top three???) and Bertrand Tavernier’s “La Princesse de Montpensier” at 6/1. Of course, these are the same bookmakers who say Sam Worthington is the favorite to be the next James Bond, so a modicum of skepticism is no doubt warranted. (Paddy Power)

Manohla Dargis journeys into “one of cinema’s last glamorous kingdoms,” and reports back: the stars are scarce, press screenings have empty seats, and the Chinese film “Chongqing Blues” is no good. But she liked Mathieu Amalric’s “Tournee” and Manoel de Oliveira’s “The Strange Case of Angelica,” and says that the presentation (big screens, top-quality projection) is impressive enough to “remind you when movies were bigger than you, bigger than life.” (The New York Times) 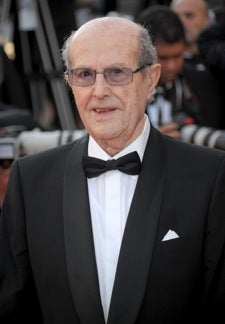 A quick note from Todd McCarthy: Manoel de Oliveira, right, the 101-year-old director of “O Estranho Caso de Angelica” (“The Strange Case of Angelica”), “is the first director to have combined meetings with the Pope and [Cannes chief] Gilles Jacob in the same day.” He also says de Oliveira doesn’t look a day over 87. (Todd McCarthy’s Deep Focus) (Photo of de Oliveira by Ian Gavan/Getty Images)

Vanity Fair’s Julian Sancton, meanwhile, goes to a screening of de Oliveira’s movie … and falls asleep. He blames it on lack of sleep, jet lag, the subtitles and the slow pace, among other things. But he doesn’t really like the movie, and doesn’t think he dozed off long enough to miss anything. “His age is the most notable and inspiring thing about him,” Sancton says of the director. And for now, I’m afraid, his nap is the most notable thing about Julian Sancton. (Little Gold Men)

Steven Zeitchik has come to love Romanian films that play at Cannes, from “The Death of Mr. Lazarescu” and Palme d’Or winner “4 Months, 3 Weeks and 2 Days” to this year’s “Tuesday, After Christmas,” which is playing in the Un Certain Regard section. He calls Radu Muntean’s film, which deals with the guild and complications of an extra-marital affair, “a remarkable, pitch-perfect work, as convincing and affecting a portrayal of the subtleties of modern life and marriage as you’ll find on the screen.” But it’s still looking for a U.S. distributor, and Zeitchik isn’t optimistic. (24 Frames)

The BBC’s Fiona Pryor offers a “reporter’s log” of her Cannes experience. On Thursday she sees three films (the Korean film “The Housemade” blew her away), encounters the maker of “Zombie Women of Satan” (it’s at the market, not the festival, of course), and recaps the controversies du jour. She also gets confused and seems to think that being chosen for the official competition is the same thing as “being nominated for the Palme d’Or.” It isn’t, exactly: the award has 18 competitors, one winner, and no nominees. (BBC News)

David Poland says that Cannes matters. And he says that it doesn’t matter. And in the process, he sets off one hell of a fight amongst the readers who comment on his site. But he does bring up a point worth following up, when he points out how the Today Show has been live from Cannes this week, and adds, “and if there is a mention of the Palme d’Or winner on the Today Show when all is said and done, it will be a frickin’ miracle.” If Mike Leigh, Ken Loach or Doug Liman (i.e., guys who make movies in English) win, I’d say there’s a pretty good chance we’ll hear a mention; if it’s Im Sangsoo or Abbas Kiarostami, not so much. (The Hot Blog)

Cinematical offers “five key tips for surviving Cannes 2010.” Most of them are the kind of tips you kind of need before you leave home (“pack comfortable shoes,” learn about the hotels, do your homework on the movies ahead of time, that kind of thing), but latecomers and first-timers might want to take notice. (Cinematical)

Now we know it’s a real festival: Jeff Wells, in between a slew of posts about the many movies he’s seen and photos of the places he’s been, lodges complaints about security guards and crowded parties. (It’s either that or complaints about the wi-fi, you know.) In this case, he left the “Robin Hood” party to use the bathroom – well, actually, to use “a deserted area of the beach” – and found they wouldn’t let him back in. So he left.   He also writes about "Wall Street 2: Money Never Sleeps," which he thinks is strong and smart and solid until the last half hour, when it "blows itself up."  I didn’t read the rest of his review, but apparently there are spoilers. (Hollywood Elsewhere)