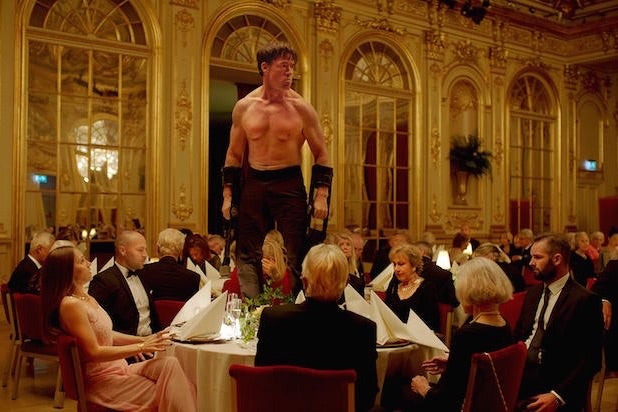 Ruben Ostlund’s seriocomic art-world satire “The Square” has won the Palme d’Or as the best film at the 2017 Cannes Film Festival.

“The Square” stars Claes Bang as Christian, the curator of a museum that is courting contemporary art to stay current, while simultaneously courting the YouTube generation to stay solvent. When the film premiered at the festival on May 19, TheWrap called it “a long, scathing, brilliantly funny film with a jaw-dropping set piece …  It is a bold, generous and marvelously constructed exploration of its director’s favorite question: ‘Aren’t we humans a sorry lot?'”

Sofia Coppola won the best director prize for her Southern Gothic adaptation “The Beguiled,” becoming the second woman to win that award in the festival’s 70-year history, and the first since Yuliya Solntseva won in 1961.

Joaquin Phoenix was named the festival’s best actor for “You Were Never Really Here,” while the best actress award went to Diane Kruger for “In the Fade.”

Nicole Kidman, who appeared in four films at the festival, including the competition titles “The Beguiled” and “The Killing of a Sacred Deer,” won a special 70th anniversary prize.

Two of the most daring films in the festival, Yorgos Lanthimos’ “The Killing of a Sacred Deer” and Lynne Ramsay’s “You Were Never Really Here,” shared the screenplay award. The Ramsay film was the only one to win more than one award from the jury.

The jury, which was headed by director Pedro Almodovar, recognized most of the critical favorites at this year’s festival. Unlike last year, when acclaimed films like “Toni Erdmann” and “Paterson” were overlooked completely, this year’s awards went to celebrated films that, for the most part, had strong support from the press and from festivalgoers.

In Screen Daily’s critic’ scoreboard, “The Square” did not score as highly as “Loveless,” which topped the poll, or “You Were Never Really Here,” the runner-up, but it was solidly in the top rank of films.

The two main-competition films from Netflix, Bong Joon Ho’s “Okja” and Noah Baumbach’s “The Meyerowitz Stories,” also went unrewarded amidst controversy over the streaming service’s presence at the festival.

Also Read: Netflix Slays the Sacred Cows of Cannes - So What Comes Next?

The Camera d’Or, which is given to the best first film from any section of the festival, went to Leonor Serrail’s “Jeune Femme,” which screened in the Un Certain Regard section.