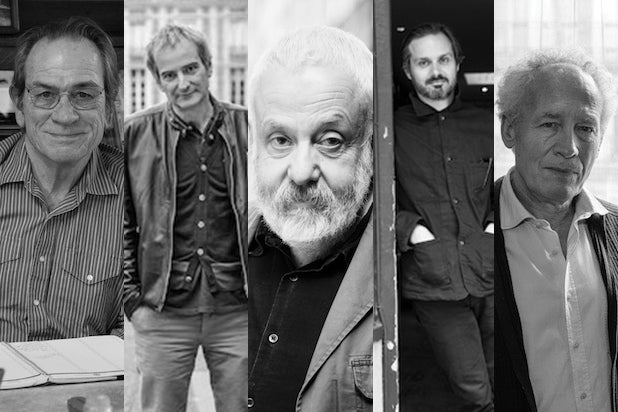 This story and accompanying portfolio first appeared in CannesWrap.

“My dream way to go to Cannes would be to go as a director,” Sony Classics co-president Tom Bernard told TheWrap this year. “They’re really the stars of the festival.”

We agree, so we had photographers in Paris, London, New York, Los Angeles and San Saba, Texas, shoot directors who’ll be taking films to this year’s festival. The result is a cross-section from all of Cannes: six directors (representing five movies) from the main competition, two from Directors’ Fortnight and one each from Un Certain Regard, Midnight Screenings and Critics’ Week.

Ned Benson is heading to the Croisette with his first feature, the Un Certain Regard entry “Eleanor Rigby,” while the Dardenne brothers (“Two Days, One Night”) have been here half-a-dozen times before, and are looking to set a record with their third Palme d’Or win.

Mike Leigh is bringing “Mr. Turner” to town almost 20 years after winning the Palme for “Secrets & Lies.” Olivier Assayas (“The Clouds of Sils Maria”) and Tommy Lee Jones (“The Homesman”) have had films in the festival before, Assayas most recently with Carlos and Jones with “The Three Burials of Melquiades Estrada.”

Jim Mickle is going Sundance-to-Cannes with “Cold in July,” a path  he also took last year with “We Are What We Are.” Damien Chazelle is another Sundance alum with his second feature, “Whiplash,” while fellow sophomore director David Robert Mitchell is the only American in Critics’ Week with “It Follows.”

And Bennett Miller is new to the fest but not to the spotlight: His last two films, “Capote” and “Moneyball,” were both Oscar nominees.

They are among more than 100 feature and short-film directors whose work will screen in official Cannes sections or independent sidebars this year, and who will receive the film world’s pre- eminent showcase in the land that developed the auteur theory. At a festival bathed in star power, they shine the brightest.