Carey Mulligan and Zoe Kazan are in talks to star as New York Times reporters Megan Twohey and Jodi Kantor, who broke the Harvey Weinstein scandal, in “She Said” for Universal Pictures, an individual with knowledge of the project told TheWrap.

“Unorthodox” director Maria Schrader will direct. Rebecca Lenkiewicz is writing the script. The film will be based on the New York Times bestseller “She Said: Breaking the Sexual Harassment Story That Helped Ignite a Movement.” It will begin production this summer.

Annapurna Pictures and Plan B optioned the rights to “She Said” in 2018 under their production deal. Megan Ellison will executive produce for Annapurna with Sue Naegle, while Brad Pitt, Dede Gardner and Jeremy Kleiner will produce for Plan B. 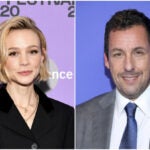 Mulligan is just coming off of her Oscar-nominated performance in “Promising Young Woman” and is gearing up to film Johan Renck’s “Spaceman” and Bradley Cooper’s “Maestro.” She is represented by CAA, Julian Belfrage Associates, Relevant and Jackoway Austen Tyerman Wertheimer Mandelbaum Morris Bernstein Tratner & Klein.

Kazan most recently starred in HBO’s limited series “The Plot Against America,” as well as “Ballad of Buster Scruggs” and “The Big Sick.” She is represented by UTA, Jennifer Konawal, Relevant, Jackoway Austen Tyerman Wertheimer Mandelbaum Morris Bernstein Tratner & Klein.

“She Said” will mark Kazan and Mulligan’s third collaboration, although this is the first time they will star on screen together. The duo previously starred in Ian Rickson’s Broadway production of “The Seagull” in 2008, and Mulligan starred in the 2018 film “Wildlife,” which Kazan co-wrote and produced.