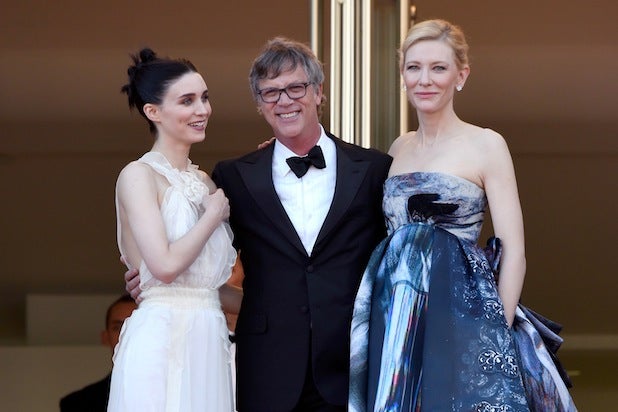 “Carol” is the biggest critical hit of the Cannes Film Festival’s main competition this year, and a film that feels destined to feature prominently in the year-end awards picture. Starring Cate Blanchett and Rooney Mara as women in the early 1950s who fall in love at great cost to themselves, it was directed by Todd Haynes with enormous sensitivity and understatement and performed by the lead actresses with remarkable subtlety.

The day after the film’s triumphant premiere at the festival, which ended in what was reportedly a 20-minute standing ovation, Haynes, Blanchett and Mara sat with TheWrap for a brief chat about the film, which the Weinstein Company will release later this year.

THEWRAP: Before this movie hits theaters, many people expect that the Supreme Court will to some degree endorse gay marriage. And yet the struggles in this film don’t feel dated — they feel timely. Were you conscious of trying to make a period piece that also had a place in the now?

TODD HAYNES: The thing about great love stories is that there always have to be barriers and obstacles between the lovers, so that you’re left yearning for something that can’t quite happen. That’s why seeing “Brokeback Mountain” was so moving to me. It made so much sense that it was about two men in a completely inexplicable place in time, but with so many obstacles for those feelings to come out.

So in a way, arguably, in our progressive movement, if that’s where we’re going, some of those obstacles are becoming less available to us in the stories we tell. There are fewer reasons now why people can’t be together.

But as we know, there are still countries all over the world where homosexuality is illegal. There is still a virulent right wing in America and in France, apparently, that speak out against gay marriage and this forward momentum.

And as we may be moving forward in tolerance of homosexuality, and as race becomes a continual focus of discussion, particularly in the States these days, I feel like there are little secret back steps happening around women’s issues and around reproductive freedom for women.

The right continues to hysterically focus on abortion, and on limiting access. That’s just insane. In a weird way it gets the least attention and the least discussion. Two steps forward, five steps back sometimes.

In Cannes, though, so many of the top films have female protagonists. Even in the Pixar movie “Inside Out,” which I just saw, the hero is a little girl, and there’s another little girl in her head who’s running the show.

ROONEY MARA: That sounds amazing. That’s, like, what’s going on in my head right now.

Also read: ‘Inside Out’ Cannes Review: Pixar Invades Cannes With One of Its Richest, Best Films

You’re dealing with an era and a subject where you can’t show your emotions. Everything has to be conveyed in small glances and the slightest touches. As an actor, does being that restrained take away some of your usual tools?

CATE BLANCHETT: For me, that was the challenge. Not just because of the period, and that their love for each other is not something you can be demonstrative about in public. But also, Patricia Highsmith creates these characters who are ambiguous and deeply private. And it’s a challenge onscreen to play someone who has a privacy about their sexuality.

Even today, if you’re playing gay or lesbian, as a performer that’s meant to be the thing you’re putting front and center. And not everyone is like that. Not everyone wants to talk about their sexuality all the time. So you had to make perforations into the character so that the audience could be allowed in, but still maintain that ambiguous distance that Patricia Highsmith has from her character.

Rooney, it takes us a while to really see what’s going on with your character: Is she interested? Is this flirtation? Was it tricky playing somebody so hard to read?

MARA: Ask the people in my life. [laughs] No. I mean, no, not really. I guess on film it’s a different thing than in real life, because you wonder if you’re doing enough, if you’re putting forth enough for it to be able to tell the story. But I just had to trust that Todd was watching and knew what he was doing. Which he did.

HAYNES: I watch it, and I feel certain that she’s interested. It’s all about looks, it’s so much about who’s looking at whom. And at the beginning of the film, Therese is the instigator of the looks. She’s observing Carol. We are all looking at Carol, but it’s because of Therese that we are doing that. I felt that the desire is implicit in that, you know what I mean?

MARA: But it is ambiguous about what that desire is. Am I in awe of her or am I love in her?

HAYNES: Do I want to have sex with her? Yes, that’s right.

Also read: A Look at Cannes Sensation ‘Carol': This Is Where Gay Rights Began, in Part

BLANCHETT: But that was the beautiful thing in the book, that she didn’t have a language or a framework to even know that such feelings could be felt. And the men in the film are trying to grapple with that as well. They’re not figures of evil. We’re all in this pressure cooker, this hermetically sealed environment where nobody can find the language for what’s happening.