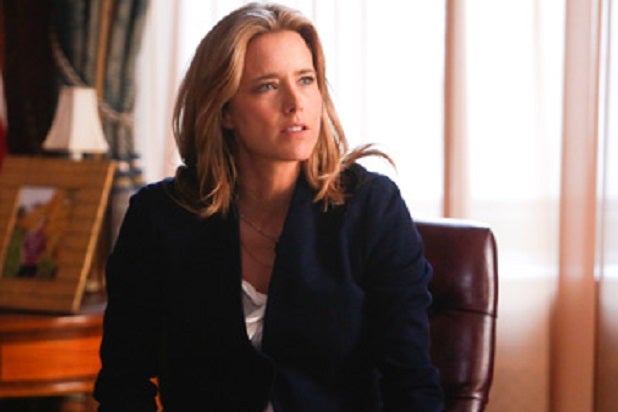 On the new CBS drama “Madam Secretary,” newly appointed Secretary of State Elizabeth McCord (star Tea Leoni, “Tower Heist”) has to quickly figure out what kind of politician, wife and mother she wants to be.

A former CIA analyst, Elizabeth steps into the spotlight when her predecessor dies in a suspicious accident and the president (Keith Carradine, “Fargo”) personally asks her to take the job. The only problem is she had settled into a cozy and bucolic life as a college professor, before duty called. That meant having the time and energy to not only care for her husband and children but even a horse or two. Now, Elizabeth must gingerly navigate the rough and unforgiving waters of Washington politics, diplomacy and protocol while still maintaining some semblance of a healthy, happy home life to suit her family.

Unfortunately for viewers, “Madam Secretary,” like its heroine, suffers from an identity crisis.

The series opener, which debuts Sunday, is rendered glacial by its derivative approach. This is in spite of a top-notch cast, which boasts convincing performances from Leoni and Carradine, as well as notable veteran actors Zeljko Ivanek, Bebe Neuwirth and Tim Daly.

Creator Barbara Hall (“Joan of Arcadia” and “Judging Amy”) doesn’t seem to know if she wants “Madam Secretary” to be more like “The West Wing” or “House of Cards” with a dash of “The Good Wife.” There’s even a little “Veep” like humor at times on the show, which is co-produced by Oscar-winning actor Morgan Freeman.

Elizabeth’s unyielding idealism smacks of President Josiah Bartlet, for instance, as she tackles her first assignment: negotiating the extrication of two American college students/brothers captured in a very unfriendly Syria.

Although POTUS’ chief of staff Russell Jackson (Ivanek, “Damages”) adamantly argues that the United States would be better served walking away from the situation, Elizabeth promises the parents that she will bring their sons home. And in the vein of “The West Wing,” she proceeds to do whatever she has to do to make good on her word. Cue the inspiring music.

For a taste of “House of Cards,” look no further than the subplot on the opaque circumstances surrounding the former secretary of state’s death. Did someone want him dead and if so, who? Will there be more deaths and will that person or persons come after Elizabeth next?

Elizabeth isn’t afraid to get her hands a little dirty a la Alicia Florrick on “The Good Wife.” But when she wallows in the mud and murk, it is to save lives not ascend the career ladder. She’s also more of a devoted wife, fearlessly exposing her vulnerabilities to her loving hubby Henry (Daly). Even though Elizabeth awkwardly asks Henry about her masculine energy as a form of pillow talk, the scene is sweet and endearing and captures the tangible intimacy fans have come to expect from hits like “The Good Wife.”

It’s only natural “Madam Secretary” would mimic “The Good Wife” a little, right? The two are programming companions with the freshman offering serving as a lead in for the sixth-season drama.

But just as “Parks and Recreation” thrived when it stopped trying to be “The Office 2.0,” this political drama will fare better as it carves out its own voice. Two necessary tacks will be to focus more on the delicious chemistry between Elizabeth and Henry and her wonderfully contentious exchanges with Russell. After all, he’s the professional adversary she will undoubtedly have to continue to fight in order to get the president’s ear.

Speaking of derivative, Leoni’s not-so-coincidental resemblance to former Secretary of State and first lady Hillary Clinton is also undeniable. There’s even a good old-fashioned makeover in the pilot, complete with a red-and-blue state friendly haircut. But, Leoni contends that her performance is inspired more by Madeleine Albright than Clinton. Wink.

Whatever the case, “Madam Secretary” has the pedigree and potential to be a great show. It just has to be more original.