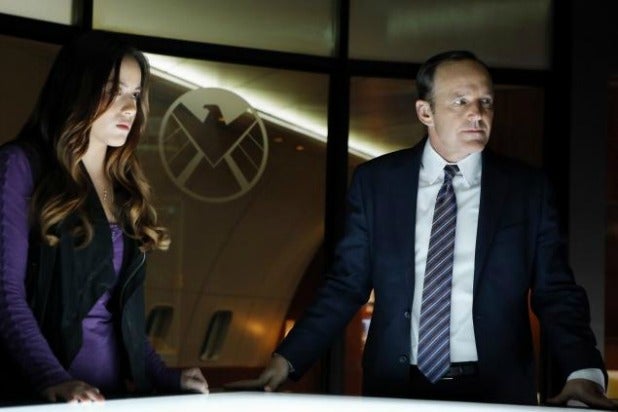 Clark Gregg is a busy man.

Until around 2010, he was a veteran character actor and indie filmmaker, best known for work on sitcoms and directing the adaptation of the Chuck Palahniuk novel “Choke.” And then, of course, his role within the Marvel Universe ramped up and he became an incredibly valuable member of the most profitable film franchise going, so beloved by fans for his lack of powers that the company brought him back after sacrificing him for the unifying moment in “The Avengers.”

Now, he’s the star of ABC’s spinoff series “Agents of S.H.I.E.L.D.” and thus very active again in the Marvel Universe (including, potentially, with the company’s four new upcoming TV shows, as he explains in the following discussion). Oh, and he’s also promoting his latest directorial effort, a semi-cynical show biz noir called “Trust Me,” in which he stars as a former child star who has transitioned to being a hack agent desperate for a client who can return him to the spotlight… or at least profitability.

TheWrap: Was there a moment that made you want to make this?
Gregg: Well I wasn’t a child actor and didn’t feel like that this was necessarily representative of the experience of child actors, but I did work with some people and still see the kind of lovable but desperate agents, one of whom I knew was a child actor himself who now represented these people and was kind of looking for the 10-year-old who was going to take him to the big time. And that just seemed hilarious and sad to me. Show business can be fun, laughing and fun and games and this is so exciting and creative, and then all of a sudden, bam, all of a sudden, people are getting chopped up to pieces.

I write about Hollywood, I write about movies, so obviously I’m into it, but it strikes me that there’s something particularly sad about show business, the highs and lows.
Gregg: I agree completely agree with that. Never heard it put that way, but I agree it’s dead on.

Why do you think there can be a particular sadness in this industry?
Gregg: I’m sad even answering this. I think it’s because everyone’s got this dream. They call it the “Dream Factory,” and it’s been this way for 100 years, since the filmmakers moved from Queens out west. And there’s this bizarre relationship that people have with, you can be a movie star and suddenly you’ll be the immortal and people will worship you and people try to get that. When I first started coming to LA from New York, you’d go to a diner and say, “Oh my god, she came here to be a movie star and now she’s getting coffee.” Because it’s a myth.

I chose this particular thing, but I think it’s across all the chapters of the American Dream, the idea that you can have this transformative break. If you work hard, you can have this break and suddenly you’ll become something else, and it’s at its most phosphorescent in Hollywood, and the most maniacal in the child version of Hollywood.

Now working with a major studio, do you feel different about Hollywood and its inner-workings?
Gregg: I’m so glad you brought that up. Absolutely in many ways yes. You still see how it’s a product and it’s commodified and it’s commerce, but when I walk into a mall to pick up something and see two ten-year-old boys stop in their tracks, just completely flustered to see someone who knows the Avengers walking past, and I can stop and take a picture with them and watch them giggle, that’s fantastic.

So do you think you could direct a comic book movie now? As a director, what’s your sweet spot?
Gregg: I hope at some point, it’d be great, if there was the right property and the time was right to work with Marvel in that way, just because they’re so amazing and helping you utilize that part of the filmmaking process. They bring a lot of directors who have some or little experience using that technology and really help them along with it. I’ve seen the kind of pre-viz stuff they do. In fact, the day they were killing Coulson off with “The Avengers,” they knew I was upset, so Jeremy Latcham brought me over an animated version of The Hulk smashing Loki like a rag doll to kind of ease my pain. They let me know where that was going for him.

What did you learn from doing that full first season, since the reviews were tepid at first and then the show came into its own. Did you have to wait for the movie stuff to happen? Were you sitting on your hands?
Gregg: I knew that was coming, I was anxious to get to that place, but I felt both ways. I felt like it was a big deal to try to take Marvel, even in “Agents of S.H.I.E.L.D.,” which is not superheroes, to take that to the small screen. That’s a huge transition. Traditionally superhero stuff has not worked on television, so I knew that was going to be interesting, starting out with a bunch of new characters, not characters that everyone knew for 30 years, all new characters except for Coulson. I thought that would take a while, and it did take a while and there were some missteps here and there, but it’s also, there was some character building and some of those episodes that wasn’t giving people what they wanted, you’ve gotta have foreplay. You’ve gotta set the tables, you’ve got to understand who these people are, what they mean to each other, and start to get to know them a little bit, or else you don’t care what’s happening, you don’t care when one of them turns Hydra.

Some of those shows, I think in retrospect, will hold up better than people realize, because so much of that was going on. People I know who are going back and watching the season are seeing stuff they didn’t quite appreciate before. That said, I do think in fairness it did take a minute to figure out how to make this work on TV, and especially in a world where you can watch a whole season in “House of Cards” in two days. It used to be something they’re very nervous about on network TV, maybe they still are, that you have an episode that isn’t complete unto itself, you have to tune in to see the next episode in the same way you have to on “Homeland.”

There’s another Marvel show coming…
Gregg: There are four! All coming at once. “Agent Carter” takes place in the 40’s. That said, I know Marvel will find some way to connect our shows but I don’t know how. She’s a terrific actress so I’m praying for a time travel episode but I doubt that’ll happen. And in New York they’re starting on Daredevil and Iron Fist and two others. I’m excited to see what they’re going to do with those two shows, I love that they’re shooting them in New York. That’s been one of the fun things about this, to have Agent Coulson rebuilding S.H.I.E.L.D., it’ll be interesting to see how much that’ll involve him recruiting and crossing over to those shows.

What’s it like to keep those secrets? How much do you know?
Gregg: I would say the old spy term “need to know basis” is really accurate. When they need me to know something, they tell me. I used to bristle at that and then I found out a few things when I found them. And then it was really hard, I knew Agent Coulson wasn’t going to survive “The Avengers. It’s hard, people ask you questions, I don’t like being dishonest, but then at a certain point, people had read a script or were starting to spoil it, and I would actively dissemble. I would try to shoot that down, I didn’t want to spoil it for people.

This season, I knew some stuff was coming down with S.H.I.E.L.D., I knew there was a possibility with Hydra, but more than that, I didn’t know, I didn’t know it was going to happen with my own team. I really liked that. I had a frustration, I didn’t know what the hell this Tahiti thing was, and the frustration I had about not knowing that and the confusion about it was really fun.