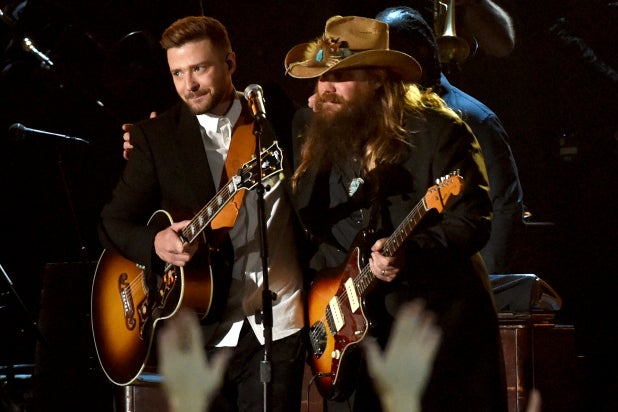 Justin Timberlake performs onstage at the 49th annual CMA Awards at the Bridgestone Arena on November 4, 2015 in Nashville, Tennessee.

Wednesday evening is a time for celebrating country music on ABC. But come Thursday morning — thanks to one of America’s favorite other pastimes — the network may well be mourning its CMA Awards TV ratings.

Last year, the CMA Awards on ABC landed a 3.8 rating/12 share in the advertiser-coveted 18-49 demographic, with an average of 13.62 million total viewers between 8 p.m. and 11 o’clock — the primetime hours.

While those are big numbers at first blush, the special was down 16 percent from 2014’s version, and tied the show’s lowest demo rating to-date (which was initially set in 2012). The 2015 CMA Awards were also down 16 percent among overall viewers (versus 16.25 million), hitting a new all-time low there. Don’t expect that trend to reverse-course this year.

Tonight’s CMAs should be even worse than their predecessor (and all other iterations), despite this being the landmark 50th anniversary of the awards. Unfortunately, ABC will be stuck with coal on the celebration’s golden anniversary.

Why? Well, the downward trajectory in recent years surely shouldn’t install optimism in anybody, for starters. Nor should the fact that this is the ninth straight CMAs for hosts Carrie Underwood and Brad Paisley. (If it’s definitely broke…?) But really, the big problem lies a few channels over on Fox — a familiar foe.

Last year, the 49th CMAs were dominated in the demo by Fox’s “Empire.” This year the news (and outlook) is far bleaker — the awards show is going up against a rare World Series Game 7. It’s curtains for the Nashville party.

To make matters even more negative for Channing Dungey & Co., this is a Fall Classic between two teams that haven’t won a ring since at least 1948, citing the case of tonight’s hometown Cleveland Indians. It’s been far longer for the Chicago Cubs, who haven’t taken home a World Series trophy since 1908. So, yeah, fans of these two teams aren’t missing this one live, and certainly not for some country music back-pat.

Games 1 through 6 have flattened everything they’ve faced so far, including NBC’s uber-powerful “Sunday Night Football” this week — and that one was an overtime contest between bitter divisional rivals the Philadelphia Eagles and Dallas Cowboys, who were jockeying for first-place position. Expect that trend to continue.

NBC wised-up by midweek. On Wednesday afternoon, the peacock-mascoted network announced it was pulling original episodes from tonight’s prime, conceding to Fox Sports’ big lottery ticket cash-in. CBS is sticking with two new episodes and one repeat, TheWrap has confirmed, while CW is going to let “Arrow” and “Frequency” originals fly. Good luck, you guys.

Also Read: Charlie Sheen Gets His Wish, Is Going to World Series to Cheer on Indians

The CMA Awards had better hope Beyonce shows up, as has been reported according to anonymous sources. The 2015 version had Justin Timberlake (pictured above), and the only thing he helped was potentially slowing the bleeding. She’s a bigger name and draw, but if Michael Jackson himself moonwalked on stage, sports fans would still stay locked on to the Kyle Hendricks-Corey Kluber pitching matchup.

ABC is banking on bigger-than-usual delayed viewing gains this time around, and it has the right awards show for catchup viewing — the CMAs typically see a larger percentage of growth in the following days than other awards shows do. Last year, they had the best Live + 3 Day viewing bump of any major awards show.

So, the Disney-owned broadcast net knows you’ll catch Alabama a day or two after opting for Chicago and Cleveland.

Meanwhile, for World Series host Fox, that broadcast network needs about a 22.5 Nielsen rating for Game 7 to be its most-watched baseball game ever — and they’ve got a real shot at that. Worst-case scenario, tonight will at least be the most-watched in 15 years.

After all, Game 6, which wasn’t even close on the scoreboard, ended up as the most-watched Game 6 since 1997, totaling 23.7 million viewers. Tonight, Fox Sports is anticipating a whopping 35 million, which represents the traditional 78 percent Game 7 lift over 1-6 average of 20 million viewers.