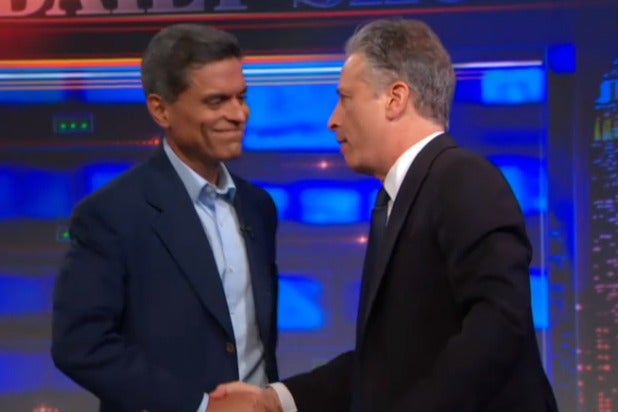 CNN host Fareed Zakaria joked on “The Daily Show” Thursday that he may soon answer to Jon Stewart.

“I’m a little nervous because I realize I might be speaking to my future boss,” Zakaria said.

In response to Rupert Murdoch’s efforts to buy Time Warner — which owns CNN — Stewart has launched a joke campaign to raise money to take over the cable news channel.

“Can I tell you something? Our fake Kickstarter to buy CNN is up to $150 billion now,” Stewart told the “Fareed Zakaria GPS” host. “When we charge their credit cards I have a feeling we’ll be disappointed.”

“I think it would be a fascinating challenge for you,” Zakaria said.

Zakaria also made the case that despite the crises in Gaza, Iraq and the Ukraine, this is not the worst foreign policy scenario the U.S. has faced. He chided Sen. John McCain for suggesting it was the worst in his lifetime.

“During the Cold War, the superpowers had 45,000 nuclear missiles pointed at each other,” Zakaria said. “We went to war in Vietnam where we lost… almost 60,000 Americans, but the Vietnamese lost 3 million by some counts. At least one million. There was the 1973 war between Egypt and Israel. We went up to Defcon 3, which was the highest state of alert other than the Cuban Missile Crisis.”

Stewart noted that the U.S. has also been through a Civil War.

“You might have forgotten — that wasn’t during McCain’s lifetime,” Zakaria joked.