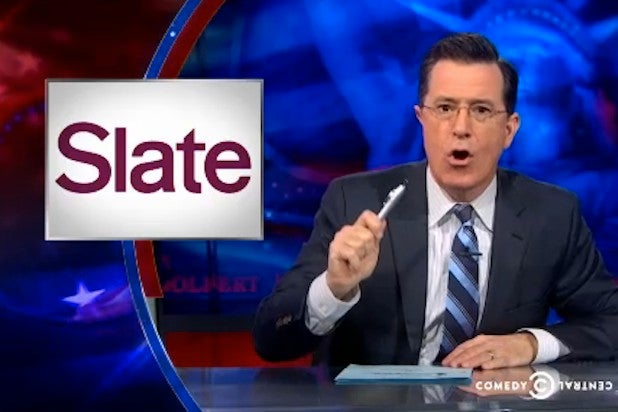 #CancelColbert is the top trending topic right now and the subject of a swarm of media coverage on this boring Friday, but if you were to go and actually search Twitter for the phrase, you’d have absolutely no idea why anyone wants to axe the Emmy-winning host in the first place.

That’s because very few actually do.

On Thursday night, the @ColbertReport account tweeted a joke Colbert made on Wednesday about Washington Redskins owner Dan Snyder, who recently announced the launch of a foundation to help Native Americans (as a PR stunt to stave off critics of his team’s name). “I am willing to show #Asian community I care by introducing the Ching-Chong Ding-Dong Foundation for Sensitivity to Orientals or Whatever,” the Colbert account tweeted, failing to give it the proper context of the joke.

That got some people understandably angry, and yes, #CancelColbert started to trend. Media outlets (including TheWrap) jumped on it, which only blew the hashtag up further until Comedy Central issued a statement saying that neither Colbert (who tweets at @StephenAtHome) or his show (@ColbertNation) had written the tweet; @ColbertReport is operated by the network. Colbert tweeted about it, too.

Here are a few examples of stories about the kerfuffle, from HuffPost, Slate, Time, Salon, Vanity Fair, and Entertainment Weekly, just to name a few.

Once the correct information — plus, the context — got out there, the backlash and subsequent explanation inspired more news stories, from just about every major online outlet. It also inspired plenty of backlash to the backlash, with comedians and loyal fans of Colbert’s show expressing outrage that people would be outraged at what was so obviously satire.

Now, the story has eaten itself to the point that the #CancelColbert hashtag simply returns media stories about the mess and indignant fans who think those who are outraged — at this point mostly a group in hiding — are morons who don’t understand satire.

And then, of course, are the people who are pointing this all out by also using that hashtag:

A lot of the people who use #CancelColbert are using it in a satirical sense, not unlike the joke that originally sparked the controversy.

#CancelColbert The hash tag that’s half people taking themselves to seriously, and half people making fun of those people. #Satire #context