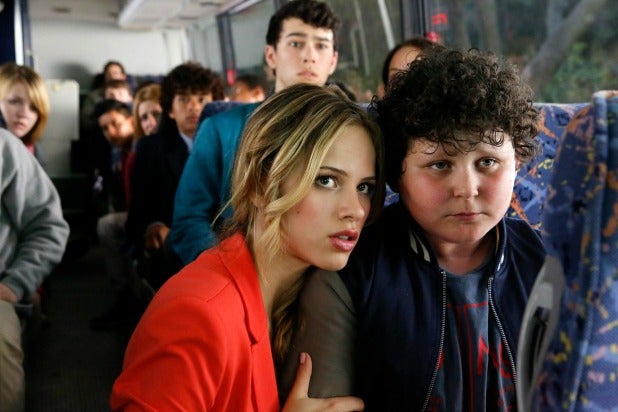 NBC’s new series “Crisis” is one of those shows that expects us to care about its characters because of their important titles: CEO, FBI Agent, First Son.

But the pilot episode, which premieres Sunday, doesn’t slow down enough to let us get to know its characters, or care much about whether they escape the thing in the title.

The crisis is this: Bad guys abduct a busload of hyper-privileged high school kids. Their parents include the richest and most powerful people in the country, and the bad guys want them to do bad things to get their kids back. Okay…

The show does a good job of setting up a lot of conflict in a very short time, but I’d be more invested if I got to know the characters more — and if they had more dimension. I’m sure viewers will get to know them later, if they’re intrigued enough to keep checking back.

Personally, I’m not. It felt too contrived. But child endangerment is a powerful hook, even if no one on “Crisis” is in any “Hunger Games”-level peril.

So the show has that going for it: Our built-in sympathy for kids. And we like Secret Service Agent Marcus Finley (Lance Gross), who loses the President’s son on his first day on the detail. And we kind of feel for FBI agent Susie Dunn (Rachael Taylor), because she’s been ordered to re-connect with her tough CEO sister, Meg Fitch (Gillian Anderson), whose daughter is among the captured kids. And of course we like Gillian Anderson because of “X-Files.”

Beth Ann Gibson (Stevie Lynn Jones) is the student we’re most supposed to root for, because she’s the regular girl surrounded by rich kids. And she has to deal with her sniveling dad (Dermot Mulroney), who turns out to have some surprises.

So does Meg’s daughter, Amber (Halston Sage), though her dark secret is a massive cliché. The Police wrote a song about it once.

Do you get the sense that the show might have too many characters? I’ve only gotten through about two-thirds of them. The others didn’t really stand out for me.

At least “Crisis” looks good: Not just its stars, but its lovely sets and confident cinematography. I’m also a sucker for helicopters – there’s something inherently dramatic about the sound of the blades – and the show has some pleasant helicopt-sploitation.

So you might get into “Crisis,” if you like characters and crises piled atop one another, and are willing to sort them out later.