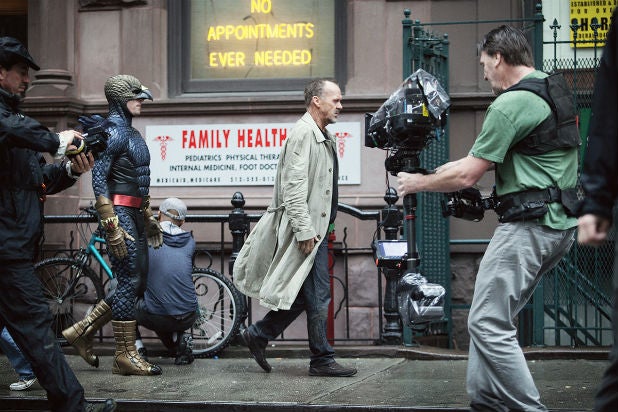 Just as it made a strong showing in the Oscar nominations Thursday morning, “Birdman” was the front-runner with the most nominations for the Critics’ Choice Movie Awards Thursday night. It also ended the night with the most trophies, taking home seven, including both Best Actor and Best Actor in a Comedy for Michael Keaton, Best Acting Ensemble, and Best Editing (the film was shot to look as if it was a single continuous take).

“Boyhood” followed with four awards, including two of the biggest honors of the night: Best Picture and Best Director for Richard Linklater. The film’s star Ellar Coltrane was honored as Best Young Actor for the movie that was filmed over 12 years, beginning when he was just six years old.

The annual event switched from The CW to a live broadcast on A&E for its 20th anniversary year. Michael Strahan was on hand as host of the show, which took place at the Hollywood Palladium.

Special awards were given to Jessica Chastain, Kevin Costner and Ron Howard. Chastain earned the inaugural Critics’ Choice MVP Award for her standout work in four films over the past year. Costner was honored with the Lifetime Achievement Award, while Howard was given the Critics’ Choice Louis XIII Genius Award.

In three categories, the winners were films that had been surprisingly omitted from Oscar nominations earlier in the day. “The Lego Movie” was named Best Animated Film, leading director Chris Miller to begin his speech by saying, “What a rollercoaster of emotions today has been.”

Steve James’ “Life Itself,” the film about Roger Ebert that was a shocking no-show on the Oscar documentary slate, won the award for best doc, while the Oscar-snubbed “Force Majeure” was named the best foreign language film.

With nearly 30 categories, including made-for-TV categories honoring action films, sci-fi/horror films and comedies, the show handed out some awards on the red carpet and others in a brief pre-show presentation. But nominees in some categories didn’t know they’d lost until announcements were made during commercial breaks, while no announcement was ever made in the house for key categories like Best Foreign Language Film and Best Documentary.

The glut of categories also led to the disconcerting sight of an organization of writers giving out the screenplay awards, which were won by “Birdman” and “Gone Girl,” in a non-televised segment of the ceremony.

The awards are chosen by the members of the Broadcast Film Critics Association, the largest film critics’ organization in the country. It is made up of more than 280 television, radio and internet critics and journalists (including TheWrap‘s Steve Pond).

The awards are typically a reliable indicator of Oscar success. Of the 19 categories that overlapped last year, 17 of the Critics‘ Choice winners went on to win Oscars.

BEST HAIR & MAKEUP
“Foxcatcher”
“Guardians of the Galaxy” — WINNER
“The Hobbit: The Battle of the Five Armies”
“Into the Woods”
“Maleficent”

BEST VISUAL EFFECTS
“Dawn of the Planet of the Apes” — WINNER
“Edge of Tomorrow”
“Guardians of the Galaxy”
“The Hobbit: The Battle of the Five Armies”
“Interstellar”