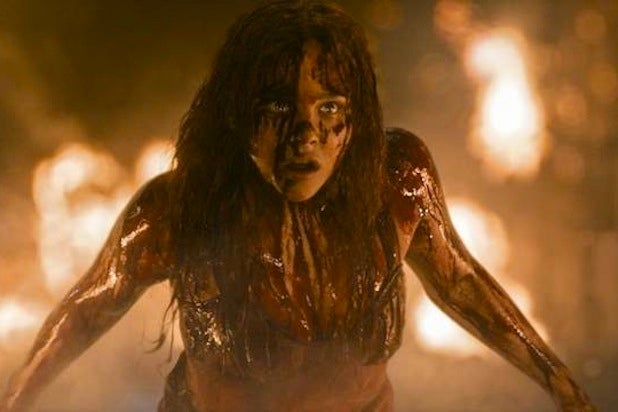 Stephen King’s pubescent-turned-psychotic telekinetic “Carrie” has arrived in theaters, but is it actually worth paying double-digit price of admission when you can just re-watch the 1976 classic?

The critics are evenly split.

So what went wrong?

TheWrap‘s film critic, Alonso Duralde, thinks the main problem lies in the premise we’ve seen over and over again — whether based on King’s novel or not — that just seems stale at this point.

“There will be more versions of ‘Carrie’ in the years to come, and perhaps one of them will rival Brian De Palma’s 1976 film as a portrait of adolescent outsider-dom and as a purely terrifying piece of horror cinema,” Duralde wrote. “This new one is neither; it doesn’t do anything strikingly wrong, it’s just unnecessary.”

Los Angeles Times critic Betsy Sharkey concurred — although she noted Moore “never had a better handle on demented” as Mama White, and Moretz brought admirable “sensitivity and depth” to the role previously occupied by Sissy Spacek.

“The current ‘Carrie,’ however, is never able to get past De Palma’s singular imprint to make a distinctive statement of its own,” Sharkey wrote. “Except for a ridiculously sanitized new ending, new ‘Carrie’ is not that different from old ‘Carrie.’ And that’s a crying shame.”

New York Post critic Lou Lumenick voiced similar disappointments, and complained audiences are “more likely to snooze than be shocked this time around.”

“The new version of the endlessly imitated final scene? So utterly lame, you’ll want to go out and watch the original on Netflix,” Lumenick concluded. “Save yourself some time and money, and bypass this new “Carrie” altogether.”

Still, there are a fair amount of critics who say give “Carrie” a shot.

Entertainment Weekly’s Owen Gleiberman recognized that Peirce’s task of remaking a horror classic (or any movie, for that matter) was no easy task, yet enjoyed her “savvy” encore.

“She follows De Palma’s version quite faithfully, evoking everything from his camera angles to his lighting to his flying-object F/X to his gleeful staging of mean-girl antics,” Gleiberman wrote. “At the same time, she offers just enough tweaks and updated details to present the material in a new way.”

The Detroit News’ Tom Long argued “Carrie” manages to “still carry a punch,” as its themes of religious fanaticism and childhood bullying are present in the modern world more than ever.

“Moore is terrifying as a guilt-addled true believer, and Moretz caresses her role when she gets the chance. And the hot topics do indeed remain hot,” Long wrote. “‘Carrie'” may be spilling old blood, but the horrors at its heart remain quite recognizable.”