(Warning: This post contains spoilers for the third episode of “Cruel Summer.”)

Much of the third episode of Freeform’s slow-burn thriller “Cruel Summer” was spent chronicling the deteriorating relationship between Jeanette (Chiara Aurelia) and her mother Cindy (Sarah Drew), with the pair’s seemingly tight-knit mother-daughter dynamic in the show’s 1993 timeline replaced by Cindy’s conspicuous absence in 1995 as the entire Turner family seemingly comes undone under the weight of Kate’s allegations against Jeanette.

“I think for Cindy, 1994 [the middle timeline] is the pinnacle of success,” Drew said in an interview with TheWrap. “Her daughter has now become the popular, gorgeous, desired girl with all the cool friends. And so, in Cindy’s mind, we are living the good life … So when there’s a crack in that — regardless of whether it’s true or not — she has to get it fixed, she’s got to stucco over the crack right away. Fix that appearance if you want to hold yourself together.”

“And for Cindy, whose identity rests on how successful her children are, this all really throws her for a loop,” she continued. 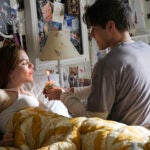 Kate accusing Jeanette of being complicit in her kidnapping is what turns the rest of the town against the Turners, but the tense dynamic between the two families extends even further back to Cindy’s high school years with Kate’s mom, Joy (Andrea Anders). The episode plays coy about revealing what actually happened between the two, but Drew says it definitely factors into how things play out for their daughters.

“In Episode 2, Joy tells her daughter that Cindy is creepy and always wanted to be her, and was after her husband and whatever. And then you cut to episode three and Cindy’s having a very similar problem, except that she’s the star and Joy is the puppy dog that wants to be her,” she said. “You’re left as a viewer to ask the question, are one of those people lying? Are one of those people in denial? Or was their perception of that moment, and that time in their life, really the thing that they’re saying out loud?”

Read more of TheWrap’s interview with Drew below.

TheWrap: We saw Cindy’s relationship with her daughter deteriorate pretty steadily across the three timelines in this episode, but in the earliest timeline her mom is still the person Jeanette turns to when she has a fight with her friend. What is that moment like for Cindy?

Drew: I think for Cindy, number one, it feels so good to be needed. That is a huge piece of her identity, especially in ’93. Just the vulnerability in that moment of “Oh, my baby, it’s alright. I’m here.” Secondly, I suppose Mallory has always been kind of a “weird” friend for Jeanette. And Jeanette in ’93 is a little weird in terms of how Cindy thinks about what popularity is, what success is in high school, what success is in a family dynamic. [Mimicking Cindy:] And maybe you would really benefit from maybe branching out, maybe it’s okay that you’re fighting with Mallory. Friends, you know, grow apart, just like how you’re gonna get your braces off and straighten your hair and look prettier. [Laughs.] What I’m so intrigued about is that, from Cindy’s perspective, she’s just trying to love her daughter. She fully believes if you look prettier, and if you’re more popular, and if you’re hanging out with people like Kate Wallace, you will have a happier life. A more successful life. And I want you to feel good. The interesting thing about that dynamic is that sometimes moms assume that what success is for them is the same experience for their daughters. But their daughters are different humans. You know, Jeanette was perfectly happy being a little weird with her kind of weird friends. Like, she didn’t need the makeover. So it’s interesting to play that line of I’m loving you, but really what I’m doing is trying to control you so that I can look how I want, but I don’t know I’m doing that because I’m not self-aware enough to understand it. It’s complicated, I love it.

How do you find that line?

I think you play it just purely with love. That was how I played it. There was no hint of like, I’m going to choose to be a little weird and a little creepy right now. Like, no, I am going to let this moment speak for itself. Because I think that is what’s complicated about the mother-daughter dynamic — you don’t know that you’re being weird or creepy. You just think you’re loving your child, you know? And I mean, look, I have caught myself doing it with my own daughter at times. Just being like, “Are you sure you want to wear your hair like that? Do you maybe want to…” And she’s like, “No, I want it to look crazy because that feels good to me.”

In the 1994 timeline, we see Cindy being confronted with the fact that she doesn’t really know what’s going on in her daughter’s life, especially in that scene in the police station. How does she take that in and where does she go from here?

We’re gonna see some drama in the family dynamic. You know, I think for Cindy 1994 is the pinnacle of success. Her daughter has now become the popular, gorgeous, desired girl with all the cool friends. And so, in Cindy’s mind, we are living the good life. Because of my daughter’s success, we will get invited to the fancy garden parties. So when there’s a crack in that — regardless of whether it’s true or not — she has to get it fixed. She’s got to stucco over the crack right away. Fix that appearance if you want to hold yourself together. And for Cindy, whose identity rests on how successful her children are, this all really throws her for a loop. But it’s not all self-serving. I don’t want to throw Cindy completely under the bus. I do think she’s also very concerned for her child and about all of this energy that’s being thrust her child’s way. It’s a very scary situation across the board. 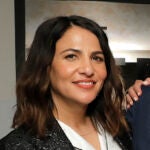 There’s also the conversation between Jeanette and her dad about the punch, where they come to an agreement that it may be for the best that they keep it from Cindy. How does that moment kind of factor into the family dynamic and how it progresses?

I think it’s certainly telling about what the whole family kind of knows to be true about who Cindy is. For her, appearance is everything. If something is shaking that, she will fly off the handle, right? That’s a thing they’ve learned about her over the years of being in a family with her. We all have these little things and family dynamics to survive. I think everybody can relate to that.

And then moving into ’95, when they have basically no relationship as far as we can tell. What can you say about what that’s like for Cindy, to be calling her daughter and not get an answer?

So the only thing I can say about 1995 is that we will discover where Cindy is in 1995. But I can’t say anything else.

We’ve gotten a few hints now about a deeper backstory between the Cindy and Kate’s mom. What can you say about their dynamic?

What’s really interesting about the show is how it plays on the idea of perception, right? In Episode 2, Joy tells her daughter that Cindy is creepy and always wanted to be her, and was after her husband and whatever. And then you cut to episode three and Cindy’s having a very similar problem, except that she’s the star and Joy is the puppy dog that wants to be her. And you’re left as a viewer to ask the question, are one of those people lying? Are one of those people in denial? Or was their perception of that moment, and that time in their life, really the thing that they’re saying out loud? Because that’s the interesting thing about the human brain and our experiences as different humans walking through the world. I can fully believe something is real and true, because of how my body reacted to something that someone else has a completely different reaction to. And they’re both true because our experience forms the reality and the truth, right? So this show is a really interesting look at how perception shifts can throw things into total disarray and create different narratives.

Oh, absolutely. I think we all do that as humans, for sure. If you get the message for long enough from your mom that the only way you’re going to be successful is getting your braces off. As soon as we can figure out how to how to style your hair, as soon as you can find some better friends, then everything will be great. You know, if you keep hearing that, and that keeps getting reinforced by the person that has the strongest voice in your life, you start to act in ways that would create that scenario without even necessarily meaning to. It makes sense to me that Jeanette would go from who she is ’93 to who she is in ’94, given the mother that she has. 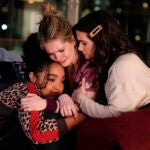 Also Read:
‘The Bold Type’ Renewed for 5th and Final Season at Freeform

Can you talk a little bit about acting with Chiara and what that’s been like across the season?

Gosh, I love her so much. We had an epic phone call as soon as I came onto the project and fully signed on. She’s a big fan of “Grey’s Anatomy” and that was so — first of all, so sweet. But the thing that was so beautiful about that first initial conversation is that we discovered how similar we are in terms of who we want to be in this industry who we want to be in the world. And I’ve come to this and I’m now older than she is but Her as an 18-year-old to be. What I love so much about her is that her talent is so enormous and so ferocious and so big and so passionate, and her heart is even bigger, like she just loves human beings, loves the people that she works with, does not want anyone to be having any kind of issues or problems on set. Both her and Olivia were both such amazing human beings, creating that that energy from the top down. And it really does make a difference on sets.

They’re both doing a lot, playing these characters who change so much across the three timelines. On your end, what’s it like sharing these scenes with Chiara?

We had this one scene for an episode down the road. It was such a scene, because we did like three different versions of it with all the different side camera angles, and she offered a very different take every time. It was a 1994 scene and she did one really wanting to please mom, one really like not giving a crap about what mom thinks, and one a little skeptical, like, is she manipulating me? She did these three calibrated versions, which elicited a totally different reaction from me in the scene. Like, if mom needs to sit my daughter down to talk about something and she’s offering these three totally different versions of energy, you’re gonna get a very different mom. And it was so fun. It’s so, so fun to get to work with a talent like hers.