Larry David’s casting woes hit a new snag on this week’s “Curb Your Enthusiasm,” which saw him fighting with a female chauffeur and arguing with Seth Rogen in one of the season’s funniest scenes so far.

The fifth episode of the 11th season, titled “Man Fights Tiny Woman,” opens with Larry and Jeff returning from a flight to New York to continue casting their series which is close to landing Seth Rogen in a major role, but when they get to the lower level of the airport, they discover that Larry’s driver is a small woman. He refuses to give her his carry-on bag, and then at the baggage carousel refuses to let her pick his bag up off the carousel despite her many protests. Larry struggles to drag all of his bags to the car, and is wiped when he gets back home, having hurt his back.

Larry decides to call the limousine service to complain, and to ask that they send a man the next time they send a car. The woman on the other line notes that their female drivers can do anything their male drivers can, to which Larry replies “I’m quite sure they can, but I just don’t want a woman carrying my bags. It’s just not a good look.” The woman notes that he sounds a bit sexist, which triggers a rant from Larry about how non-sexist he is, which the woman on the other end of the line confuses with Larry saying he wants to have sex with the driver. After much back and forth, Larry relents and says next time it’s fine if they send a female driver.

Meanwhile, Jonas the roofer arrives to check out a leak in Larry’s guest room. Jonas, a portly man, says he’s going to get on a ladder to get up on the roof, which concerns Larry – to the point that he even brings Leon to come check it out. Jonas proceeds to climb up on Larry’s roof, and once up there Larry and Leon observe creaking in their ceiling. 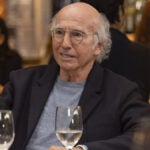 Larry goes to see the chiropractor and notices there’s no one else in the waiting room with him. The chiropractor, played by Josh Gad, explains that Larry has a strain in his back, and when he reaches up to grab a foam roller for Larry’s back, his shirt comes up and Larry notices the chiropractor’s underwear is completely frayed and full of holes. “It was like the underwear had been to war,” Larry says when later describing it to Jeff.

The episode also shows progress is finally being made on Larry’s new show, and he and Jeff visit the set to see that the production has recreated the apartment that Larry lived in from the ages of 8-25. They also discover that one of the cast members, a man named Jason Steinberg, is a Jew for Jesus and can’t work past 4:00 p.m. on Thursdays. This provides conversation fodder for Larry, Jeff and Freddy at lunchtime as they amusingly discuss the conversion of Jews to Christianity.

While at lunch, Larry asks the time, only to learn it’s past time for his car to be in a tow-away zone. He had asked Freddy to remind him when the clock struck 2, but Freddy forgot, so Larry’s car is now gone (you can probably guess where this is going…).

Back at the house, the roofer returns and offers to put all-new tiles on the roof, but it’s going to take a couple of days. Once again when Jonas goes on the roof, Larry and Leon hear creaking and cracking overhead. Larry decides he wants to get out of the house, but he doesn’t have his car, so he reluctantly calls the car service from earlier in the episode. The same woman comes to pick him up, but this time, he follows the car company’s request and lets her take his bags, which she does with ease.

Larry returns to the chiropractor, and once again he sees the same ripped underwear. This time, Larry being Larry, he can’t stay silent. “I noticed that your underwear is quite frayed,” Larry says to his chiropractor. He suggests that the reason the chiropractor has no patients is because his underwear is frayed. Gad’s character takes the criticism to heart, and seemingly has no idea how a human being should wear underwear. After asking if he should keep the frayed pair “for emergencies,” Larry replies, “These aren’t even for emergencies. You throw ‘em out. A heroin addict doesn’t keep the needles.” Larry then says he’s going to help the chiropractor and dictates an email the doctor will send to all of his patients, apologizing for his unkempt undergarments.

Larry then gets dropped off on the studio lot where Seth Rogen – who is in talks for a part in Larry’s show – is filming a movie as a viking. In the middle of the scene, Rogen bears witness to Larry letting this small woman carry all of his bags across the lot. Rogen stops his dialogue dead cold, aghast at what he’s witnessing. Larry explains that the car company wants her to carry the bags, not him. “You can’t disobey the car company,” Rogen replies sarcastically from aboard a fake viking ship.

Once Larry is at his stage, a couple of people from the show approach him to complain that Jason Steinberg, the Jew for Jesus cast member, is evangelizing to the cast during rehearsals and it’s interfering with their process. Larry says he’ll handle it, and decides to confront Jason by attempting to fact check the Virgin Mary’s birth of Jesus Christ. Jason agrees to stop evangelizing, and after complaining about his back Larry hooks him up with his chiropractor.

Larry later sees Seth Rogen on the lot, and Rogen confronts him about letting that woman carry his bags. “You got a toddler carrying your sh-t around?” Rogen asks. Larry explains that the car company told him to let her handle his luggage, but confesses “there are certain things that I would prefer a man doing to a woman,” which Rogen tells him he shouldn’t say. Larry keeps on, and Rogen replies, “Larry, just stop naming professions and which sexes should do them and which ones shouldn’t!” Larry gets the memo and walks away, but not without making clear he believes firmly in his position (as Larry David so often does). “We don’t know each other very well, you’ve said 30 insane things to me already,” Rogen says as Larry leaves, concluding one of the funniest scenes of the season so far.

Larry goes to stay at Freddy’s house while the roofer does construction on his home, but after he and Freddy get into a fight because Freddy won’t let him have the last Perrier (an oh-so-Larry-David thing over which to start a fight), Larry leaves again to go back home. But this time when the woman from the car service comes to pick him up, Larry is in no mood, and he tries to wrestle the bags away from her. They both end up on the ground, and a bystander takes a video of the physical altercation, which Rogen later sees and proclaims, “I’m never working with that guy.” And thus Larry David’s casting woes continue as another one bites the dust, following altercations with Dylan O’Brien and Woody Harrelson in previous episodes.

Back at the house, in Larry’s upstairs bedroom, Leon sees that his phone charger is going out the window and onto the roof, which the roofer is using. When Leon pulls the cord, the roofer chases after it and ends up falling through the ceiling right into Larry’s bed, serving as the punchline to the joke set up with this whole roofer storyline.

When Larry goes back to the chiropractor, he’s happy to see the office is full of patients. And then Larry is unhappy when the chiropractor starts quoting the Bible, having been evangelized by Larry’s Jews for Jesus cast member. “Oh f—k,” Larry says as the credits roll.

This was a solid episode and Rogen’s banter with David provided the biggest laugh-out-loud moment of the season so far. While the button to the luggage and roofer storylines didn’t quite land with the same aplomb as previous episode-long jokes, the Jews for Jesus gag with Gad’s chiropractor character proved to be a swell punchline. Still waiting to see Bill Hader’s arrival later this season, but Rogen is now neck-and-neck with Julie Bowen for funniest guest star appearance in Season 11 so far. 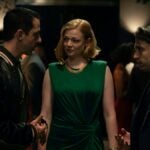