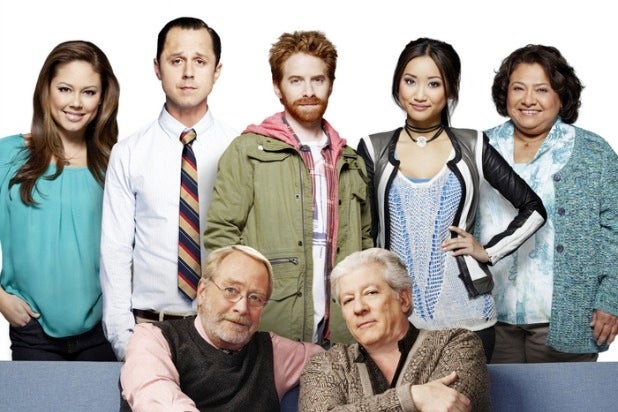 You’ve probably read by now about how offensive “Dads” is.

That’s giving the show too much credit. To offend, you have to be taken seriously, and there’s nothing in “Dads” worth worrying about.

The dads say racist, sexist, anti-Semitic things, but they’re so pathetic and helpless that it’s impossible to care. Bigotry by people in power is dangerous. Bigotry by helpless losers looks like the sad, impotent venting it is. It isn’t even fun to make fun of them, because they’re such easy targets themselves.

That leaves us with nothing to laugh at in “Dads,” which debuts Tuesday night on Fox.

If there were more of an attempt to flesh out the characters into people who make sense, we could at least invest in the ups and downs of the relationships. But it’s impossible to get involved in characters who are, at least in the first two episodes, joke-delivery systems. Especially when their jokes are so tired.

They’re more cartoonish at times than “Family Guy” or “Simpsons” characters — though, to be fair, both shows have had much more time to flesh out their two-dimensional stars. “Dads” comes from “Family Guy” executive producers Seth MacFarlane, Wellesley Wild and Alec Sulkin, as well as former “Simpsons” showrunner Mike Scully.

The stars are the likeable-enough Seth Green and Giovanni Ribisi, as successful videogame masterminds. One of their games is called “Kill Hitler 2,” which tells you the level of subtlety here. Hitler jokes are so obviously meant to shock that they’ve mostly lost the power to do so.

Martin Mull plays Ribisi’s dad, who lives with Ribisi and his wife (Vanessa Lachey). But while he regularly oversteps his bounds, Ribisi can’t kick him out because, in his eyes, his dad turns into a golden retriever when he tries to say no. (At the moment Mull literally turned into a golden retriever, I felt a little emotion for the first time watching the show — because what a cute dog.)

Peter Riegert plays dad to Green’s character and comes the closest to being sympathetic because he seems to at least understand he’s a loser and feels bad about it. There’s potential there. Riegert also has the most realistic delivery and does the best acting in the first two episodes.

As for the women: They don’t do much. Lachey is annoyed a lot. Green’s maid (Tonita Castro) exists only to set up other people’s one-liners or awkwardness, as when she mistakes Riegert’s character for Rocky Dennis. At one point she calls Riegert “diablo” when he denies the existence of God.

There’s a scene in the second episode of “Dads” that I think summarizes what’s wrong with it. Mull’s character is eating penguin meat. That’s supposed to be funny because penguins are so loveable. But it isn’t, because the joke has no grounding in reality. But anyway.

Mull offers some to Green.

Kind of a funny non sequitur there. Then:

Or is the joke that Mull is so insensitive and stupid? I’m not laughing at that, either. Because he’s an absurd man eating penguin meat. There are no stakes here.

Or am I supposed to laugh at the anti-Semitic joke, and then at Mull’s stupidity, so the joke works both ways? That seems to be the plan here. But the joke doesn’t work either way.