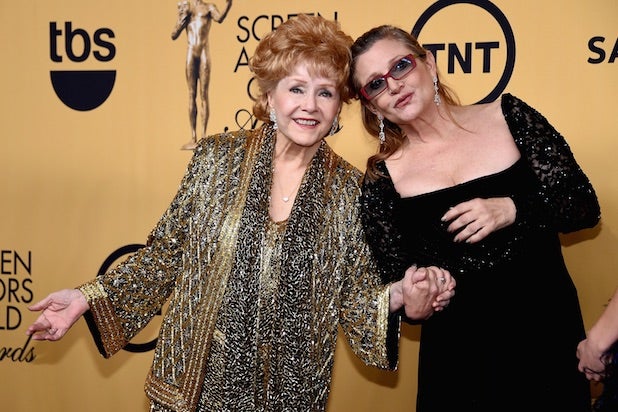 Updated Dec. 28, 5:47 p.m. PT: Debbie Reynolds died on Wednesday after being rushed to an L.A. hospital for treatment of a possible stroke.

Debbie Reynolds was reportedly hospitalized after suffering a possible stroke on Wednesday afternoon, and her son told ABC News that she “is not OK.”

The 84-year-old entertainer was at son Todd Fisher’s home in Beverly Hills when someone called 911 at around 1 p.m., according to ABC. Los Angeles affiliate KABC said the “Singin’ in the Rain” actress was transported to Cedars Sinai Medical Center. Fisher did not describe his mother’s condition to ABC beyond saying she “is not OK.”

Shortly after news of Fisher’s death broke, Reynolds shared a message on Facebook thanking fans for their support.

“Thank you to everyone who has embraced the gifts and talents of my beloved and amazing daughter,” she wrote. “I am grateful for your thoughts and prayers that are now guiding her to her next stop. Love Carrie’s Mother.”

Fisher had been hospitalized since Friday, when the “Star Wars” icon had a heart attack while returning to Los Angeles on a United Airlines flight from London. She was in the U.K. to promote her memoir “The Princess Diarist” and film the Channel 4/Amazon comedy “Catastrophe.”

“It is with a very deep sadness that Billie Lourd confirms that her beloved mother Carrie Fisher passed away at 8:55 this morning,” the statement said. “She was loved by the world and she will be missed profoundly. Our entire family thanks you for your thoughts and prayers.”

Also Read: Carrie Fisher's 'The Princess Diarist' Is Out of Stock on Amazon

Reynolds and Fisher recently starred together in this year’s “Bright Lights,” an HBO Documentary Films production about the mother-daughter duo’s relationship and legacy, which first premiered at Cannes back in May. Directed by Fisher Stevens and Alexis Bloom, the doc will air on HBO in March.