The new 20th Century Studios film, which debuted on Hulu on Friday, is a sexually charged dramatic thriller starring Ben Affleck and Ana de Armas as a married couple. But in an interview with Collider, Lyne got candid about his philosophy when it comes to shooting sex scenes.

“You feel like you’re doing it with them. Even with the sex scenes, I’m a little bit like a cheerleader,” Lyne told Collider about his directorial process during intimate sequences. “I have the horror of imagining these poor people going at it in silence and not knowing whether they look good or whether their ass is flabby. I get very close, almost like a shrink, or a husband or wife. For 10 weeks or more, you have to develop an incredible intimacy with them.” 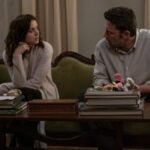 Lyne compared the preparation for the sex scenes in “Fatal Attraction” with Michael Douglas and Glenn Close to the ones in “Deep Water,” for which he worked with an intimacy coordinator for the first time. “It’s not quite so easy now, as it was. Things were a little more relaxed when I did ‘Fatal Attraction,’” Lyne said.

“Before they did that love scene over the sink, they’d had a couple of drinks. They had a glass of champagne to ease the scene” he said, noting that “Deep Water” was a much different experience. “Now, you couldn’t do that because they’d be worried about lawsuits. And there’s an intimacy coordinator who’s watching a screen. It doesn’t worry me, particularly, but it implies a lack of trust, which I don’t like because that’s all I’ve got with the actors. If they don’t trust me, then I have nothing.”

Before “Deep Water,” Lyne hadn’t directed a film since 2002’s “Unfaithful” starring Diane Lane. But as of late, intimacy coordinators have become the norm on film and television productions involving nudity and/or sex scenes, which many stars and filmmakers have embraced as an extra layer of protection.

In 2019, HBO exec Casey Bloys event went so far as to predict that intimacy coordinators may become as standard on production as stunt coordinators.