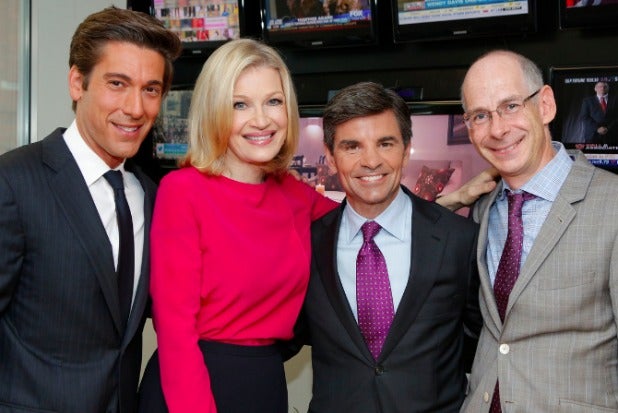 Diane Sawyer is stepping down from anchoring ABC’s “World News,” and will be replaced by David Muir. George Stephanopoulos, meanwhile, is being promoted to chief anchor of ABC News.

Sawyer reached out to then-ABC News chief Ben Sherwood last year about transitioning out of ABC’s nightly news show to focus more on in-depth stories, particularly her “Hidden America” investigations. She’s going out on top, with “World News” winning the May sweep in the 25-54 demographic most important to news show. It was the the evening broadcast’s first sweeps victory in more than six years.

“After wonderful years at ‘World News’ I decided it is time to move to a new full time role at ABC News. I’ll be joined by an incredible team of journalists dedicated to enterprise reporting, innovative approaches to breaking news and new ways of thinking about big issues and events around the world,” Sawyer said. “I can’t wait to continue bringing more of my specials to prime time and appearing on all ABC News broadcasts, as well. And to my friends and colleagues George and David — congratulations. I look forward to exciting work together and great times ahead.”

Stephanopoulos, who has helped lead “Good Morning America” to number one in the mornings, also anchors ABC’s “This Week.” He will also lead ABC News’ election coverage starting with the mid-terms this fall through “the 2016 presidential race and beyond,” ABC News said in a release.

Muir will become anchor and managing editor of World News on September 2 after a decade of covering major stories for “World News,” first reporting for “World News Tonight” with Peter Jennings. Among his reporting were stories from inside Iran last year. His “Made in America” series about companies creating jobs in America was nominated for an Emmy.

In 2013, Muir was named co-anchor of ABC’s “20/20.”  He will continue to co-anchor the program with Elizabeth Vargas, but will no longer anchor “World News” Saturday and Sunday, as he has since 2011.

“On this incredibly humbling day, I think of the 12-year-old boy with a dream of being a reporter and seeing the world.  I never could have imagined seeing that world with Diane Sawyer,” said Muir. “On this day I thank her for not only setting the bar for the rest of us, but for being a trusted friend.  I cannot wait to begin this new adventure with Diane and with George, whose political brain power and endless curiosity inspire me, and drive us all to be better every day.”

Here is ABC News president James Goldston’s letter to his staff about the changes and promotions:

Over the last few weeks we’ve celebrated some terrific milestones – number one in the May sweep across the board and earning the highest honors for journalistic excellence in the Edward R. Murrow awards.

Great storytelling and great results start with a team that strives every day to do work of the highest quality.

So I want to share some important and exciting news about three of our anchors who will help lead us to be even better.

At the end of last year Diane Sawyer started a conversation with Ben about one day stepping away from World News and devoting her boundless energy full time to a team which will create and commission original reporting, big ideas and interviews for all platforms.

As much as she loved leading World News to new heights – with so much important, brilliant and impactful reporting and a number one finish in the May sweep – Diane decided that now is the moment to concentrate full time on tackling big issues in new ways.

For many years to come Diane will be a driving force at ABC News with her exceptional storytelling genius.  She will create innovative television specials and events, and, of course, continue to conduct the biggest interviews with the most important and extraordinary people in the world.  Starting this summer she will begin to develop these new stories, working closely with me, David Sloan, Almin Karamehmedovic, Jeanmarie Condon, Claire Weinraub and Michael Corn.  And, of course, Ben will continue to be a part of this creative process as Diane’s long time editorial partner.

Diane’s incredible work on Hidden America and her masterful interviews with Gabby Giffords, Malala Yousafzai and recently Hillary Clinton bring great distinction to the entire news division.  Her curiosity, passion and energy inspire us all.  Diane is one of the giants of modern journalism, and we can’t wait to see where she’ll lead us next.

I’m also very pleased to announce that George Stephanopoulos will take on a new and vital responsibility for our organization in the new role as Chief Anchor of ABC News.

In this position, George will be our lead anchor for major special events and breaking news at ABC, driving our live network coverage for the biggest stories.  From the retirement of Pope Benedict to the manhunt for the Boston bomber, George skillfully navigates uncertain and unfolding situations while synthesizing the latest reporting for our viewers. George is adept at balancing both complex global and public policy questions and deeply personal stories in interviews with numerous luminaries from Vladimir Putin to Angelina Jolie.

George brings to all our programs his tremendous intellect, competitive drive, unwavering work ethic and a laser-like focus that have played an essential role in our recent success, driving Good Morning America forward to #1 and leading This Week into its best competitive position in a generation.  He will continue to anchor both shows as he assumes this new and critical leadership role.

And there is simply no better political journalist on television today.  That is why George will once again lead our election coverage starting with the mid-terms this Fall and onwards to the 2016 presidential race and beyond.

The news division could not be in stronger hands with George in his new role.

Then starting September 2, David Muir will become the Anchor and Managing Editor of our flagship broadcast, World News.

For more than a decade, David has been front and center reporting on the biggest stories of our time, helping drive us forward with tireless dedication, hard work and good humor.  From Katrina to Egypt’s Tahrir Square, from Fukushima to Newtown, David has carefully guided our viewers through tragedy and world events with his tough questions and trademark compassion.  He was the first American journalist to report from Mogadishu, Somalia on the worst famine of a generation and recently took our viewers into Iran, getting rare access to the streets of Tehran.

David’s “Made in America” series has become a hallmark of World News, showing just how impactful our work can be as he champions small town triumphs and companies creating jobs. David has made his reputation reporting from the ground on every big story of recent times, and we know that when the big stories happen, wherever they happen, David will be there for us and our audience.

Over the years David has brought our viewers numerous newsmaker interviews and he’ll continue to do so.  From the campaign trail with presidential candidate Mitt Romney to First Lady Michelle Obama, Israeli Prime Minister Benjamin Netanyahu and Apple CEO Tim Cook among many others, his interviews generate headlines well beyond ABC News.

David will also continue to anchor 20/20 with Elizabeth Vargas and will play a key role in covering the biggest breaking news events as they happen.

I could not be more thrilled that he is taking the helm at World News.

Diane, George and David are all singular talents, one-of-a kind journalists, gifted storytellers and uniquely skilled broadcasters who inspire us, every day, to do our very best work.

Which simply means they fit in quite nicely here at ABC News, because we have the best team in the business.  With these three and Robin Roberts – the heart of our organization – and all of you leading us forward, I am confident there are many great days and much great work ahead.

Please join me in congratulating Diane, George and David on their exciting new roles.