What happens after the happily ever after? That’s the cheeky, and intriguing, question “Disenchanted” asks. The answers it comes up with, alas, aren’t quite the stuff dreams are made of.

Instead, this straight-to-streaming sequel seems to have been designed with another aim in mind: attracting as many festivity-fatigued families as possible. And in that, it’s likely to succeed. Because while “Disenchanted” is not entirely enchanting, it is a brightly energetic escape in the grand Disney tradition.

Unfortunately, there are other elements from the Disney tradition that should have been left behind. That, after all, was the point of 2007’s “Enchanted,” a disarmingly post-modern fairy tale that pulled Disney into the present with wit and charm. 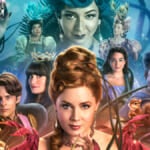 Fifteen years later, we revisit Giselle (Amy Adams), the erstwhile almost-princess who was pushed from fairy tale animation into live-action adventure with the thoroughly-modern Robert (Patrick Dempsey). Their update is told as a bedtime story by Giselle’s chipmunk sidekick Pip (a grating Griffin Newman), whose children insist that “there is no after after happily ever after… you just get married, and then nothing ever happens to you again.”

It’s a smart start, and a promising one, except that director Adam Shankman (“Hairspray”) and writer Brigitte Hales (“Once Upon a Time”) seem to agree just a little too much. As stepmom to teenage Morgan (newcomer Gabriella Baldacchino) and mom to baby Sofia (Mila and Lara Jackson), Giselle has decided, against a furious Morgan’s wishes, to move the family out of Manhattan into the suburb of Monrovia. The filmmakers give us some mildly amusing observations about suburban life, from the McMansion-y turret of their new home to the commuter alienation into which Robert immediately sinks.

But the real focus is on the moms, who — in their nosy, competitive, air-headed unhappiness — put all their efforts into PTA preening.  Giselle, who has apparently abandoned the design business she began in the last film, soon realizes that she, too, is deeply unhappy in their new town. So when Sofia’s royal godparents Edward (James Marsden) and Nancy (Idina Menzel) gift Sofia with a magic wand, Giselle uses it to turn Monrovia into a fairy land like the one she left behind. 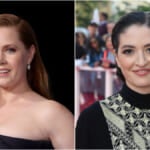 Obviously, using magic for unintended purposes is a rookie move. But Giselle is totally shocked when things take a swift turn for the worse. First of all, local alpha-mom Malvina (Maya Rudolph) is now the literal queen of the land — and a cheerfully evil one, at that. Worse, though, is the realization that Giselle herself is becoming malevolent as well. With each chime of the clock, she moves closer to being a stereotypical Wicked Stepmother, while Morgan is turning into a sweet, submissive Cinderella.

Regrettably for everyone, this brings us right back to old-Disney territory: the aging woman becomes the evil cliché, while the younger woman — who started as a typical, happily T-shirted teen — is given a full-on princess glow-up, complete with attitude adjustment, beautiful ball gown, and cinched-in waist.

The retrograde plot is especially baffling given that the movie already has a spectacular villain in Rudolph, who understands the assignment perfectly. It’s not that Adams can’t play the heavy; it’s that the daffily unique Giselle should never have been forced to become one. This is so evident that even the film seems ambivalent about it, leaving Adams caught between two underwritten roles without the freedom to fully inhabit either.

On the bright side, the women’s musical standoff is the undeniable highlight of a strong soundtrack written by Alan Menken and Stephen Schwartz. In fact, all the musical numbers are well-staged and high-spirited. But to see Rudolph and Adams pushed into what is, essentially, a mismatched catfight is a little dispiriting. When the delightfully devilish Malvina scorns Giselle by hissing, “You’re a garden snake, and I’m a big puff adder,” she’s not kidding. 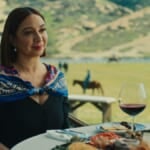 Also Read:
How Maya Rudolph Created a ‘Soul-Searching’ Billionaire Going Through a Life Crisis in ‘Loot’

In fact, Rudolph is really the only actor who seems to be having the sort of fun “Enchanted” elicited so easily. Marsden, who proves yet again that he gets this world better than anyone, is mysteriously elbowed out of sight when he should be embraced. Dempsey also feels like an afterthought, while Kolton Stewart is introduced as a potential prince for Morgan but never given a chance to shine. Malvina’s obsequious henchwomen, played by Yvette Nicole Brown and Jayma Mays, are underused and underserved by a script that dismisses them both.

Menzel gets more screentime, but it feels as forced as much of the rest of the movie. The filmmakers clearly wanted to generate “Frozen”-style magic, to such a degree that Menzel’s big ballad, “Love Power” (which she knocks out of the park) includes the unironically-belted line “Let it glow.”

What’s most frustrating is how much potential has been wasted. “Disenchanted” has a new creative team behind it, with Shankman replacing “Enchanted” director Kevin Lima, and Hales (along with three others, including Richard LaGravenese, getting “story by” credits) taking over from original writer Bill Kelly. Perhaps as a result, there’s an enormous disconnect between the two films.

The original dared to push back, to think a little differently, to admit that it was time for Disney to evolve. Its follow-up goes in the other direction, searching for safety in easy familiarity. And it is easy entertainment: Well-paced, visually appealing, and musically engaging, it’s an obvious choice to keep kids occupied during the holiday season.

But “Enchanted” was built for the ages, offering real magic through genuine affection and respect for the audience, the characters and the actors alike. Though this too-well-titled sequel is an elaborate spectacle, it never casts a true spell.