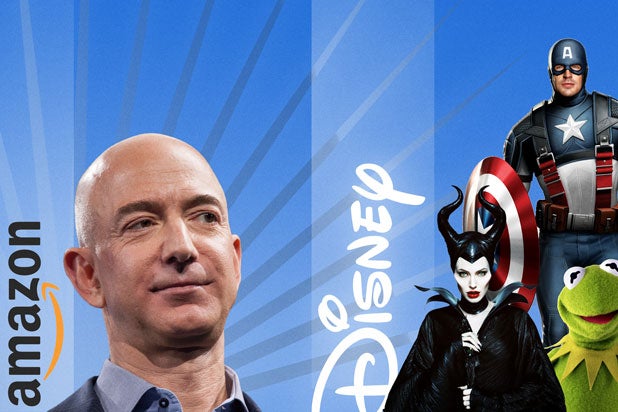 Amazon may have picked on the wrong Hollywood kid to bully in Disney.

The e-commerce giant’s tough-guy stance isn’t really about blocking pre-orders on “The Muppets Movie,” “Maleficent” or even “Captain America: The Winter Soldier” to get better distribution deals on DVDs and Blu-ray discs, however.  It’s more about the future, specifically fueling Amazon’s voracious appetite for market share and determining whether the world’s largest web retailer or Hollywood studios will call the shots on home entertainment distribution when the digital revolution takes full effect.

Neither side was talking Tuesday — when “The Muppets Movie” went on sale, as scheduled — but several things are clear.

“This isn’t about DVD profits in the next quarter, or the one after that,” said Scott Tilghman, a B. Riley analyst who has followed the web titan for years. “Amazon is very long-term focused on nearly everything they do. And what they want to do is control media, movies and music to the same extent that they do books.”

Amazon’s similarly hard-ball strategy with book publisher Hachette set off a storm of opposition from many of the world’s top authors. More than 900 writers including Stephen King and Suzanne Collins signed a petition criticizing Amazon that ran in a two-page ad in Sunday’s New York Times.

But Hachette does not wield the market power Uncle Walt does. “Disney might be the one media company they shouldn’t have messed with,” said an executive at a rival studio. “They have Marvel, Pixar and Lucasfilm, and the Disney brand itself. As a consumer, if I can’t get a ‘Captain America’ when I want it, I’m going to get it somewhere. This is golden opportunity for somebody like Best Buy, Target or the other large retailers to jump in here.”

For the record, Amazon hasn’t restricted or cut into any sales on the Disney discs. They may have temporarily halted pre-orders, but Disney movies and shows can still be bought on the day of the release. Still, it’s a high stakes move for Amazon’s own bottom line; “Frozen,” the smash-hit, Oscar-winning animated film from Disney, became Amazon’s biggest selling children’s movie based on pre-sales alone ahead of its March DVD/Blu-ray release date. Typically, pre-orders account for 25-30 percent of overall sales.

But with wider-than-expected losses of $126 million for the quarter ending June 30, 2014, Amazon chief exective and founder Jeff Bezos is feeling greater pressure to cut costs. And with the market for physical discs shrinking, Amazon increasingly needs to up its profit margins on each sale. The industry made $3.26 billion on DVDs and Blu-rays in the first half of 2014, which is down from $3.56 billion in the same period in 2013. It actually represented a 2 percent increase in actual unit sales, because prices are falling after an 8 percent decrease in 2013, to $7.47 billion overall.

In a concession to that disadvantage, the pre-orders on digital downloads of Disney films have not been removed.

Amazon is on the wrong side of the emerging market, trying to squeeze dollars out of a business that is on the decline. It is working to do so by strong-arming distributors — unlike Walmart, it doesn’t have physical stores where it can pay low wages to employees — and so it must hope that its pre-order ban hurts Disney’s bottom line enough to make them budget; Amazon is the biggest retailer of pre-orders..

“It should be noted that Walmart, Best Buy, and other retailers can sell below cost because they make the margin up in other categories — in other words, they use hot new discs as loss leaders to drive people into stores and thus drive sales of other categories,” Tom Arnold, the editor and publisher of Home Media Magazine, tells TheWrap. “Amazon can’t do that as easily as a brick-and-mortar store. But they have to be competitive, so now they want the studios to give them better margins.”

In June, Amazon faced a similar pre-order kerfuffle with Warner Bros. removing DVD and Blu-ray offerings of such titles as “Transcendence” and “300: Rise of an Empire.” The films were removed as a negotiating tactic not only to increase pricing but also as play for more cooperative marketing dollars and better search placement, issues that likely play into the Disney standoff.

Arnold thinks that Amazon has the advantage in this fight; they are the biggest seller of pre-orders, and so while he suggests that they would be better off perfecting their impulse buy strategy, it might be hard for Disney to not make concessions. That doesn’t mean they’re willing to budge, though, given their ultimate name brand.

Wunderlich analyst Matthew Harrigan went further, fully doubting that the studio would give up ground.

“Amazon may be reacting out of considerable pressure from investors to improve its profit profile with its current loss forecasts, but we think that Disney is apt to resist vigorously even if there is some moderate effect on immediate studio profits,” he wrote in a memo on Tuesday. “Although Amazon has leverage on packaged media distribution, the increasing migration to digital distribution works in Disney’s favor given a multitude of distribution conduits, including self-distribution.”

Also read: Why the Home Entertainment Business Is in Its Best Shape in Half a Decade

One rival studio echoed that assessment, noting that it is seeing digital downloads skyrocket this year, with titles that are performing over 100 percent better than comparable titles from 2013.

“It’s a shot across the bow,” said Seth Willenson, a veteran industry consultant specializing in valuation. “I don’t think margins are the key here. It’s about the big picture. They’d love to see Amazon Prime turn into a competition for Netflix, and movies are one way they’ll try to get there.”