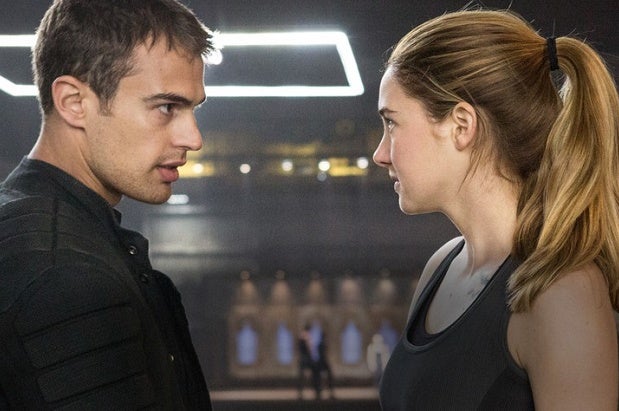 Unlike most of today’s would-be blockbusters, “Divergent” is opening in the U.S. first and then looking to conquer the worldwide box office.

Lionsgate Entertainment is counting on momentum from a U.S. opening — which analysts say could hit $60 million this weekend — to provide a big boost when it takes its adaptation of Veronica Roth‘s bestseller overseas.That rollout could prove tricky, as most fans of the young-adult series reside stateside. Although book sales are currently surging abroad, the vast majority of the 17 million copies sold have been purchased in the U.S.

The release plan for the film, which stars Shailine Woodley, is the reverse of the strategy that studios typically employ these days, particularly with movies they see as having major box-office potential. (And with Lionsgate hoping to launch another YA franchise, they hope the strategy pays off.)

“When you have a chance to launch a potentially successful franchise, you have to be careful and nurture it by building the awareness of the film overseas gradually,” Lionsgate Motion Picture Group Co-Chairman Patrick Wachsberger told TheWrap. “It’s a step-by-step process that began when the movie started getting real buzz from the U.S. press and continues through the first couple of weeks of its domestic release.”

It will open in a handful of small foreign markets this weekend, but “Divergent” will begin its international launch in earnest the week of April 4. The film’s first stops include the U.K., Italy, Belgium, Netherlands, Mexico and Finland; the following week it opens in France, Germany, Russia, Australia, Denmark and Norway. The rest of the world — and potentially China — should get the film in weeks to come.

Lionsgate opened last year’s “The Hunger Games: Catching Fire” in 63 foreign markets on the same November weekend that it released the film in the U.S. The studio scored big with that sequel, both domestically ($161 million) and abroad ($146 million).

Warner Bros. also opened “The Hobbit: The Desolation of Smaug” last year on the same December weekend domestically and overseas; it brought in $73.6 million in North America and a whopping $135 million from abroad.

But both of those were sequels, and that makes a huge difference when box office is concerned.

“Divergence” is a first-installment, and that’s a much tougher sell since film audiences aren’t familiar with the movie, its characters and often its actors. But Lionsgate has a template for the domestic-first strategy, which worked very well with the original “Twilight” movie back in 2008.

That film rang up nearly $70 million in its U.S. debut and then, after the studio gradually opened the teen vampire tale overseas, it wound up with $199 million foreign haul — just ahead of the $192 million it topped out with domestically. Just as importantly, “Twilight” set the stage for the next four movies in the franchise — which went on to gross $3.3 billion. Each film raked in more overseas than the previous one, which is what distributors love to see.

Lionsgate would be happy to see totals comparable to the first “Twilight” for “Divergent.” And it could have the advantage of playing China where “Twilight” never did, because vampires didn’t fly with the strict Mainland censors. There is no release date set, but the studio is hoping for a mid-April opening there.

Another plus of the gradual foreign rollout is that it allows the talent in the film to promote the movie in several countries. Woodley, co-stars Theo James, Kate Winslet and director Neil Burger will all hit the road ahead ahead of premieres in Europe.

There are some risks to the strategy, including increasing the danger that the piracy prevalent in many foreign markets will undercut its box-office performance. Another is that by waiting, “Divergent” will be going up against some tough competition in the coming weeks. Paramount’s Biblical epic “Noah,” Disney’s superhero sequel “Captain America: The Winter Soldier” and Johnny Depp‘s “Transendence” will all be in foreign markets in April when “Divergent” will be in the midst of its overseas run.

Still, with the possibility of a China opening — coupled with the growth of the foreign market and Lionsgate’s track record for building young-adult franchises into global hits — it’s hard to bet against “Divergent.”