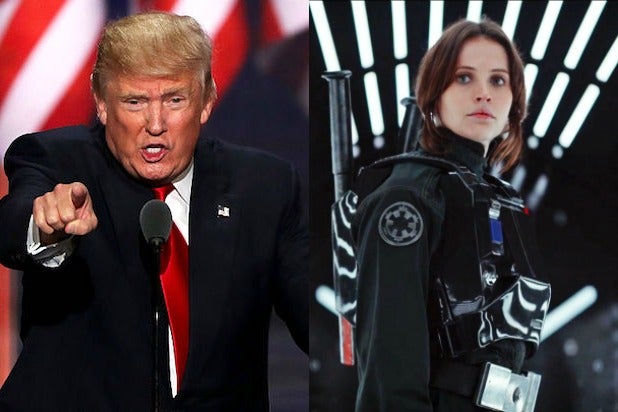 One week has transpired since a piece of so-called fake news inspired a Twitter campaign against “Rogue One: A Star Wars Story,” but the insidious #DumpStarWars hashtag still has some heat on Twitter as the Lucasfilm prequel is just days away from an expected massive global debut.

The campaign was launched by some conservatives to boycott “Rogue One” because they believe the upcoming film criticizes president-elect Donald Trump.

But now a faction of sexist trolls are using the hashtag to criticize the film simply because it has a female heroine in Jyn Erso, played by Felicity Jones — among other flak being thrown at the “Star Wars” universe.

Also Read: 'Rogue One' to Reach Up to $300 Million on Global Debut

TheWrap first received confirmation last week directly from Disney that the claims that first inspired the hashtag were completely baseless and that no anti-Trump message exists in the film.

Soon after, “Rogue One” star Riz Ahmed also denied the existence of such a pointed message against the president-elect in an interview with TheWrap.

The actor called the claims behind #DumpStarWars “weird” and said, “I don’t think the creators of this film are to be as petty and small-minded as to use something as big and all-embracing as ‘Star Wars’ to score kind of mean political points.”

There is now added confirmation that #DumpStarWars was borne out of complete hogwash, now that several staffers at TheWrap have seen “Rogue One” and know as a matter of empirical fact that there is no anti-Trump message in the film.

The claim was ridiculous to many from the start. Considering the fictional nature of the “Star Wars” stories alone — that they take place in a different time in a “galaxy far, far away” — reasonably refutes the allegations from the start.

Also Read: All 8 'Star Wars' Movies Ranked, From 'New Hope' to 'Rogue One'

But in a world where people are moved to vote, wield weapons, and also to campaign against a movie based on unfounded claims, the need to definitively debunk false allegations has grown ever more important — especially when the president-elect himself is also known to perpetuate falsehoods.

The seed of #DumpStarWars initially came from Trump supporter Jack Posobiac, who claimed on Twitter that the filmmakers rewrote and re-shot the film to add anti-Trump scenes — an allegation that, again, Disney has flatly denied.

Posobiac’s #DumpStarWars was a reaction to “Rogue One” writers Chris Weitz and Gary Whitta’s actions after Trump’s elections. The screenwriters switched their Twitter avatars to images of the logo of the Rebel Alliance with a safety pin — an anti-racist symbol — and Weitz tweeted that “the Empire is a white supremacist (human) organization.”

But now that hashtag has endured like a piece of teflon, the world is still clearly nowhere close to developing immunity to fake news.