“Dune” and “Encanto” were the big winners at the Visual Effects Society’s 2022 VES Awards, which were handed out on Tuesday evening at the Beverly Hilton Hotel in Beverly Hills.

Both films won four awards, with “Dune” taking Outstanding Visual Effects in a Photoreal Feature, the VES category that most closely corresponds to the Academy Award for Best Visual Effects. Winners in the category have gone on to win the Oscar 10 times in the past 19 years, but the last film to do so was “The Jungle Book” in 2017.

“Dune” is nominated for the Best Visual Effects Oscar along with “Spider-Man: No Way Home,” which won a VES Award for its mirror-dimension environment, and “Free Guy” “No Time to Die” and “Shang-Chi and the Legend of the Ten Rings,” which did not win anything. 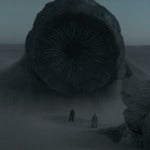 In the television categories, “Foundation” won two awards, while others went to “The Witcher,” “Loki” and “See.”

Also at the ceremony, Guillermo del Toro received the VES Award for Creative Excellence and Lucasfilm’s Lynwen Brennan received the VES Lifetime Achievement Award. The show went on without host Drew Carey, who had a last-minute emergency after replacing original host Patton Oswalt, who had to withdraw after breaking his leg.